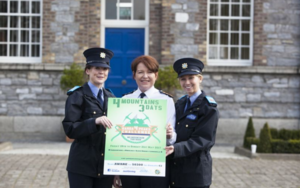 Trainee gardaí Laura Ryan, from Rathfarnham (left), and Patrice Ryan, from Tipperary (right), with Garda Commissioner Nóirín O’Sullivan this morning to launch a charity Four Peak Mountain Challenge in which 100 serving and retired gardai will take part in May

Some 25 gardaí are currently suspended from duty for suspected misconduct, including one sergeant who has been suspended for over seven years.

The Department of Justice has confirmed that out of the 13,000-strong force, 20 rank-and-file members are suspended, three sergeants, and two retired gardaí.

…“It’s very strange that proportionately the far highest number of suspensions and investigations in agencies under the Department of Justice are taking place in the Gardaí, far outstripping almost any other department,” [People Before Profit TD Richard Boyd Barrett] said.

Boyd Barrett has called for her suspension for the duration of its hearings and said the figures show a “double standard” between the treatment of ordinary gardaí and the Commissioner.

“It suggests a fundamental dysfunctionality within the force and given the treatment of whistleblowers like Maurice McCabe, it raises a question as to why these people may have been suspended,” he said.