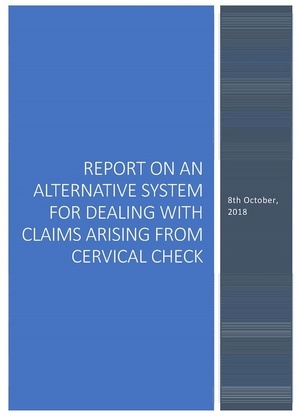 Yesterday, The establishment of a judge-led tribunal was recommended to deal with claims arising from the CervicalCheck programme.

A report by Justice Charles Meenan advises the setting up of a compensation tribunal that can determine liability on the part of CervicalCheck and award damages.

The Report considered, but rejected, the possibility that awards would be made without the women concerned having to prove fault on the part of CervicalCheck.

The basis for this conclusion is that a ‘false negative’ result could arise in the absence of any fault; therefore it would be unfair to impose no-fault liability. The hearing of the claims will be heard in private.

‘In the case of the 221 women whose smears were read wrongly, is it really appropriate to require them to prove fault?

The Report took the view that they should, on the basis that a ‘false negative’ may arise for a number of reasons, without going into the reasons.

Let me tell you the reasons why a false negative may arise and you will see that this reasoning does not justify requiring the 221 women whose smears were misread to prove liability in this case.

A false negative may arise because the location of the abnormalities in question are such that they do not show up on a smear.

This could be because the smear has not been properly done, or because the location of the abnormalities are such that they do not feature on a smear even if properly carried out.

In such cases, there may not be negligence on the part of the person reading the smear (unless it is obvious that the smear was not properly carried out, in which case they should send it back).

However, this type of false negative does not arise in relation to the 221 women whose cases gave rise to this Report.

The problem in their case was not that their abnormalities did not show up on the smear, but that the person who initially read the smear did not spot the abnormalities.

This is prima facie negligence, unless technology at the time of the initial reading was not capable of showing up the smear; no argument has been made in this regard.

Given the circumstances of their particular ‘false negative’ and the deplorable failure to inform, is it really either humane or cost effective to require these 221 women to go through the process of (a) proving liability to the Tribunal and (b) dealing with the subsequent delay and costs risk involved in a High Court hearing if the Tribunal’s finding of liability is appealed by CervicalCheck?

There might be some public benefit in a hearing on liability, albeit at considerable financial cost to the public, delay and emotional cost to these women, if and only if the proceedings of the Tribunal were public.

This would at least have the benefit of conclusively clarifying what happened regarding the reading of these smears.

However, if the proceedings are to be heard in private, one wonders if there is any benefit from an examination of liability?

I can understand how the women concerned might not want to have issues relating to the damage suffered by them heard in public; however surely if liability is in dispute it should be possible for the portion of the hearing dealing with liability to be heard in public, with the woman’s name not being made public?

It does not seem to me that her testimony would be required for a determination as to liability.”