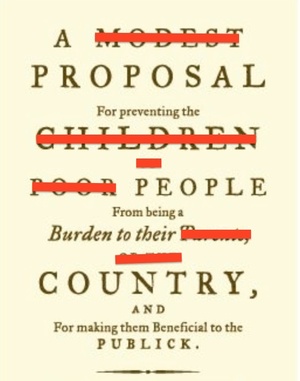 A hi-tech twist take on an old classick.

A Modest Proposal for Our Times.

For preventing the unemployed people of Europe from being a burden to their country, and for making them beneficial to the publick’

Or how economic statistics are not closely related to wellbeing.

(With apologies to JM Swift)

It is a melancholy object to those, who walk through the great towns of Europe, or travel in the housing estates of the suburbs, or download tables of official statisticks, when they see the crowds of people who have been left unemployed.

These fellow countrymen and women cannot even enjoy their enforced leisure, but must spend all their time in queuing in social security offices, being interviewed for pauperizing internships, and attending interview skill courses. They either turn thieves for want of work, or leave their dear native country to make cappuccinos for the Pretentious in the City.

To the malaise of unemployment is added the misfortune of a decline in Gross Domestic Product. Measured GDP has fallen precipitously in many European countries, and the prognosis is not favorable: even when real GDP growth is positive, it is at so low a rate, that many years will pass before the step-like downward shift suffered during the recent crisis is made up in full.

I think it is agreed by all parties that this prodigious number of unemployed and the decline in GDP is in the present deplorable state of Union a very great additional grievance; and therefore whoever could find out a fair, cheap and easy method for making these unemployed useful members of the common-wealth, and of raising the statistick of GDP, would deserve so well of the publick, as to have his/her statue set up for a preserver of the Euro.

More than two centuries ago, a most learned and Christian gentleman made a renowned modest proposal to deal with the problem of child poverty that was then so prevalent in his native Ireland (Swift, 1729).

However, his approach would not be suited to reducing the number of unemployed in Europe today, for those people are already of an age, and have been so corrupted in body by the consumption of spirits, tobacco, and other noxious substances, they would be quite unpalatable in the suggested usage. Further, that modest proposal would not have a substantial effect on measured GDP (although it would increase GDP per surviving head).

I shall now therefore humbly propose my own thoughts, suited to our times, which I hope will not be liable to the least objection.

Thus, I do humbly offer it to publick consideration, that at least half of the unemployed in the affected countries in Europe be placed in custody, and that another group, in proportion of roughly one to four or one to five, be employed in maintaining them in that situation for an extended period.

The rapid development of the IT (incarceration technology) sector in this manner offers the rare opportunity to improve two measures of wellbeing at once.

On the one hand, those who would become guests of the state would, from one moment to the next, cease to be looking for work, and thus be removed from those counted as unemployed.

Likewise those who would be employed as hosts and service providers could be recruited from the ranks of the unemployed. Most especially those whose skills in traditional occupations have been eroded by idleness and replaced by experience in street pugilism would be well-suited to careers in the expanding IT sector.

On the other hand, a step increase in GDP would be achieved. The people who currently languish in unemployment do nonetheless burden the publick purse in the form of the dole, which is a transfer from the employed and productive.

This transfer adds nothing to GDP, but merely redistributes it. How different is the treatment of the expenditures on housing, feeding, clothing, and the provision of the essential protective services in the IT sector, all of which counts towards GDP (United Nations, 2008)!

At a stroke this crucial statistick, almost universally taken as the yardstick by which to measure the strength of an economy and the wellbeing of its people, would be increased substantially.

According to statistics from the U.S. Bureau of Justice, a ratio of one service provider to four or five clients of the IT sector seems a reasonable rule of thumb. Furthermore, the costs of providing all the necessary services are considerable.

Allowing for the possibility that the rapid expansion of the IT sector could allow for certain efficiency gains—in particular, prosecutions and the provision of defense counsel could be conducted on a much more frugal basis—a conservative assumption would place expenditure at €30,000 per IT client.

Let us consider the case of Ireland—those of other European countries will be, mutatis mutandis, similar. According to Eurostat, about 245,000 were unemployed as of 2014 Q3, representing an unemployment rate of well over 10 percent.

An ambitious goal, but one demanded by the severity of the problem that the country faces, would be to increase the number of IT service users by 100,000, and to this end to employ, say, 20,000 additional members of that sorry group as service providers.

The unemployment rate would be halved by this simple expedient. Moreover, the addition to GDP would be on the order of €3.6 billion, compared to a total GDP of approximately €183 billion—a first-round increase of about 2 percentage points.

The immediate fiscal cost (net of reduced transfers) would be substantial, but not unbearable or unfinancable in relationship to the great benefit that would accrue to the countries concerned and Europe as a whole. Indeed, the expansion of the IT sector could well be financed in part through European structural adjustment funds.

Confidence in Europe’s willingness to undertake truly innovative policies would be supported, and thus sovereign yields might fall further and business optimism restored. Moreover, IT services are relatively labour-intensive, while the import content is low, so the fiscal multiplier would be high—especially in current slack conditions (Dell’Erba at al., 2014).

This proposal is not based on mere theoretical speculation. I have been assured by a very knowing American of my acquaintance that experience in his country demonstrates the many economic and social ills can be relieved by the wholesale incarceration of those who would otherwise be unemployed or indigent, whether in local, state or federal penitentiaries, and I make no doubt that the purpose will be equally served by a workhouse or stockade. In this, as in so many areas, the Europeans should swallow their pride—a sin indeed!—and follow the example of their American cousins.

I can only begin to enumerate in this short entry the many other benefits of the proposed expansion of the IT sector: First, it would greatly decrease the number of disaffected people who have no occupation to keep them from demonstrating on the street. Indeed, as clients of the IT sector typically do not have the right to vote, the electoral support for certain nefarious and disruptive parties would be substantially diminished.

Second, by the reintroduction of treadmills the expansion of the IT sector could be substantially financed by the sale of carbon offsets. European countries with calmer climes could reintroduced the rowing galleys, which were once a picturesque feature of the Mediterranean sea surrounding most of the affected periphery countries.

Third, the prevalence of criminality would decrease, because those who are most inclined to such unsociable acts would be otherwise engaged.

It is well known that the unemployed are disproportionately prone to breaching the rights of others to protection of property and body (Nagin and Land, 1993); we have evidence from our American friends that their commitment to the IT sector has enhanced the prevalence of law and order (Freeman, 1996).

Fourth, and relatedly, justice would be served. The international community, as embodied in the International Accounting Standards Board and the U.S. Financial Standards Accounting Board has seen the wisdom of accounting not only for past loan losses, but also for expected future losses (FSB, 2014).

Similarly, it is wholly appropriate to provide IT services on the basis of expected future criminal acts. Those who were perhaps otherwise unlikely to commit such acts will surely change their inclination after a period of full-time engagement in IT facilities, with the many opportunities for networking and the acquisition of new skills that they will enjoy there.

Fifth, the expanded IT sector could put to productive use the many dwellings in our suburbs and towns that were built out of motives of extravagant speculation, which are now empty and repossessed, and which, with a minimum investment in razor wire, are well suited to housing IT clients.

This reduction in supply of dwellings on the market would be of great benefit to the upstanding owners of other properties, who would rejoice at the concomitant increase in prices, and to their creditors.

Sixth, at a micropenitential level, a substantial improvement in labour productivity and a reduction in “shirking” can be expected. Those unemployed who do not enter the IT sector will have more incentive to search for employment and accept a competitive wage rate. T

hose already in employment display a “revealed preference” for not switching to the IT sector. Hence, when eligibility requirements for involvement in IT are relaxed, this group will have more incentive to accept modest remuneration and work with redoubled diligence.

Seventh, the countries that pursue the expansion of the IT sector with vigour can expect to create a thriving export sector, and achieve a lasting gain in competitiveness, without enforced internal devaluation.

There is no reason why antique quantitative restrictions on trade in IT services should be retained, especially under the Single Market in Europe. Once the immortal Ricardo explained the comparative advantage of Portugal over England in the production of wine. In the modern world, where wine may be important from the Antipodes,

Portugal may rather have a comparative advantage in the production of IT services: Its moderate climate allows the provision of hospitality without the expense of heating. As for Ireland, its more remote locations—we caste our eyes towards the distant isles and wilder shores—can ensure low operational risk.

I profess, in the sincerity of my heart, that I have not the least personal interest in endeavouring to promote this necessary scheme, having no other motive than the publick good of Europe, by reducing unemployment, increasing measured GDP, and achieving those other benefits listed above, for the author himself is not unemployed, nor a provider of IT services, but rather pursues a humble but honest trade in the manufacture and embellishment of economics statisticks.

References
Dell’Erba, Salvatore. Marcos Poplawski-Ribeiro, and Ksenia Koloskova, 2014, “Medium-Term Fiscal Multipliers during Protracted Recessions,” IMF Working paper WP/14/213.
Financial Stability Board, 2014, “Overview of Progress in the Implementation of the G20 Recommendations for Strengthening Financial Stability”
Freeman, Richard. B., 1996, “Why do so many young American men commit crimes and what might we do about it?” Journal of Economic Perspectives, Vol. 10(1), pp. 25–42.
Nagin, Daniel S., and Kenneth C. Land, 1993, “Age, criminal careers, and population heterogeneity: specification and estimation of a nonparametric, mixed Poisson model,” Crimonology, Vol. 31(3), pp. 327–362.
Swift, Jonathan, 1729, A Modest Proposal,
United Nations, 2008, System of National Accounts.