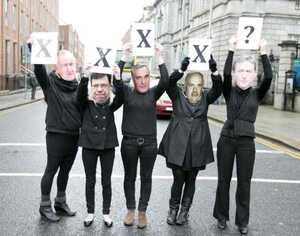 Members of Action on X Alliance outside the Dail within the last hour highlighting the 20th anniversary of the X case, where the Supreme Court directed the Government to legislate to allow for abortion where a woman’s life is in danger.

Back then, the late Supreme Court judge, Mr Niall McCarthy, emphasised the need for legislation saying: “The failure of the legislature to enact the appropriate legislation is no longer just unfortunate; it is inexcusable.”

Two decades later, after numerous expert committees, two referendums in which the people vindicated a woman’s right to life-saving abortion, several court rulings doing the same, and an acknowledgment from the current Government’s Deputy Leader that such legislation is necessary – all Labour and Fine Gael are giving us is yet another expert committee.