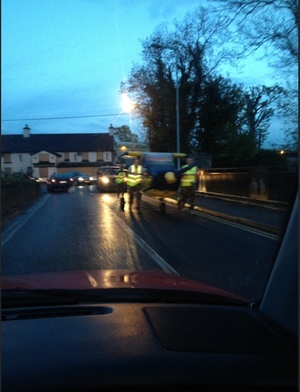 Strange Boat aims to raise awareness about the importance of organ donation. It was established by the parents of Éamonn Goggin, a young Co. Galway man whose organs were donated following a road crash in 2006.

“The Irish Air Corps will undertake a very innovative 40 hour charity non-stop marathon, between May 16 – 18, pushing a light aircraft from Baldonnel to Galway to raise awareness for organ donation and support for a national commemorative garden to organ donors. This garden, called Circle of Life, will be located in Quincentennial Park, Salthill, and is being developed by Strange Boat Donor Foundation, in partnership with Galway City Council.”

The push started in Baldonnel at 8pm last night and travelled through the night to Leixlip, Maynooth, Kilcock, Enfield, Clonard, and on to Kinnegad, for around 7am this morning. It then travelled to Miltownpass, Rochfortbridge, Tyrrellspass, Kilbeggan, Horseleap, reaching Moate, aiming to be there for 4pm this afternoon. They then plan to be in Athlone for 5.30pm. From Athlone, through the small villages of Kielty, Cornafulla, Doohan, Ballydangan, they plan to arrive in Ballinasloe at 1am tomorrow morning.

From Ballinasloe, they’ll travel through the night, to arrive in Loughrea about 7am. Then to Craughwell, Derrydonnell Beg, on to Oranmore, arriving at  Galway City approximately 2.30pm. Final destination is Quincentennial Park,  Salthill for 3pm.