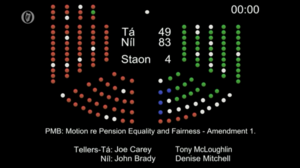 The Government has lost a Dáil vote on pension equality legislation proposed by Sinn Féin. The Government’s counter-motion was defeated by 83 votes to 49 after Fianna Fáil voted with Sinn Féin.

In it, he calls for an end to the situation whereby people – who have to retire at 65 – have to go on jobseekers’ allowance for a year before getting access to their pension.

He also called for pension equality for women following changes to pension bands and rates in 2012.

The motion can be read here 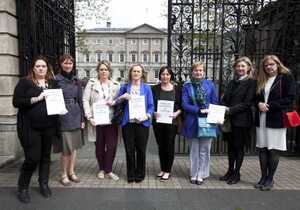 A TFMR group sat in the Dáil yesterday as Waterford TD John Halligan, an Independent, appealed to Taoiseach Enda Kenny during Leaders’ Questions to include an amendment from the TFMR in the Protection of Life During Pregnancy Bill.

This would allow for terminations in Ireland, for pregnant women diagnosed with a fatal foetal abnormality.

While delivering his question, above, Mr Halligan said four women a day, or 1,500 a year, are told they are carrying an unviable foetus every day in Ireland.

He told Mr Kenny that the TFMR group had legal advice that the Government can include for fatal foetal abnormalities in the Bill.

“The Bill going through the House on the protection of life during pregnancy is strictly within the Constitution and the law and deals specifically with cases in which there is a real and substantial risk to the life of the mother and the circumstances that arise in those cases in which a termination is allowed under the Constitution and the law. In that sense, while I understand the point the Deputy is making, this is a different set of circumstances which are not contemplated under the Bill.”

To which Deputy Halligan replied.

“The best thing to do in the one minute available to me is to tell the Taoiseach a story of a woman I met who is too traumatised to be here today with all of the women present. She has told me that she went through with the birth having been recommended not to do so because the foetus was so badly damaged and it might have a traumatic effect on her. The young baby lived for approximately 25 seconds.

“That was three years ago. I have to be blunt on this. This woman concerned is deeply traumatised. She is unable to have sexual relations with her husband, after three years. She is ill. She wakes up with nightmares almost every night because of what she saw. That is not compassion. 87% of the people of Ireland have said in an opinion poll that women should have the choice, if they are told that the foetus was incompatible with life. And would you not accept that forcing these women to go through with this, that we are damaging their lives, their lives? We are damaging their husbands’ lives, their partners’ lives and their family…forever? And with that behind you Taoiseach, of almost 87% of people, you are Taoiseach of this country, and with the deepest respect to you – I informed you I would raise this issue today – the women concerned do not need compassion. They have their partners, families and friends and the medical profession. They need help, they need help. And finally, I’m sorry Ceann Comhairle, but finally, they did meet the Minister for Health, who was deeply moved I’m told when he met these women in June, deeply moved and promised that he would do something. What that something is I don’t know but they’re the words of the minister. I again ask the Taoiseach and every other member to look up at these women and their husbands and tell them you will not allow another 1,500 women to suffer next year in the way many of them have suffered.”

Those who wish can ask their TD to include the TFMR group’s amendment in the Bill here.

Anyone See That Letter?