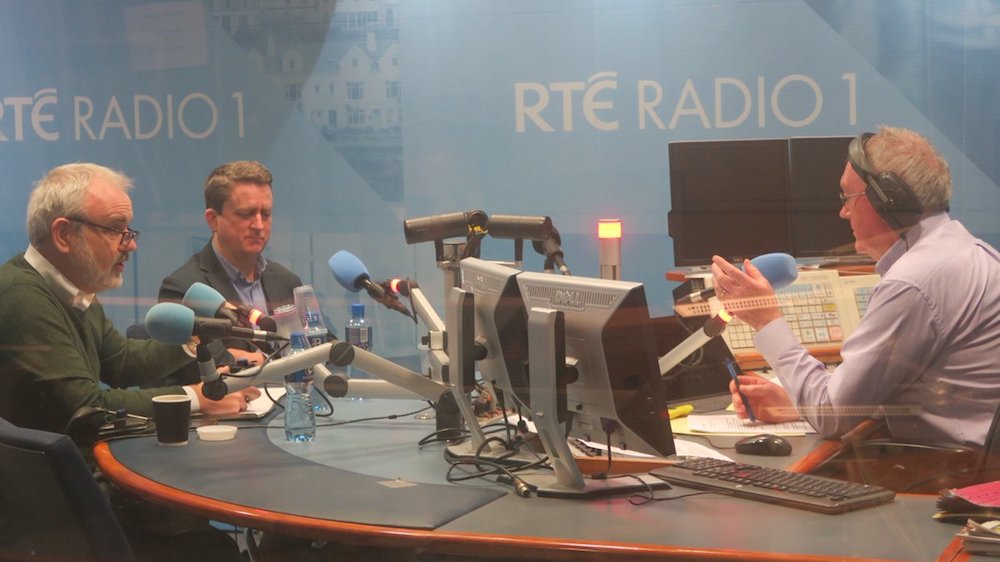 Amnesty International Ireland has so far resisted demands by the The Standards in Public Office [SIPO]  to return a €137,000 donation to fund a campaign to repeal the Eighth Amendment from George Soros’ Open Society Foundation.

Amnesty Ireland’s Colm O’Gorman appeared on RTÉ Radio One’s Today with Sean O’Rourke this morning alongside David Quinn, whose pro-life Iona Institute has been criticised in the past for accepting foreign donations.

O’ Gorman: “…We are in discussion with the standards in public office about a flawed amendment to the Electoral Act of 2001 that they have acknowledged is deeply flawed and that a decision they made recently is both unjust and , quite likely, contrary to law,

Sean O’Rourke: “Just tell us about the money?

We received a donation of 150,294 US dollars – almost a 137,000 euros at the time that we received it- for our work to secure human right compliant framework for abortion in Ireland. We publicly announced that grant. We published details of it on our website in January of 2016 and we got on with our work as we would do as a human rights organisation and as others do.

In Summer of 2016, DC Leaks, The Washington-based entity that put out the hacked material from the DNC hack earlier in the Summer published materiel from a hack from the Open Society Foundation and within that there was a strategy document that talked about how they would fund a number of organisations in Ireland to work on a campaign to repeal the Eighth Amendment. That found its way on to global pro-life websites and found its way into the hands of pro life activists here in Ireland and then it found its way into the Irish media and a story developed on the back of all that.

Following on from that we had a detailed inquiry from the Standards in Public office Commission asking us to clarify the grant, the purpose for which we received it, to forward on to them any correspondence between ourselves and the foundation in relation to the grant. We responded in detail to that request, we supplied them with information that clarified that we had received the grant from the Open Society’s Foundation in New York, the amount of the grant received and exactly what the grant would be used to do. So, we made it clear that the grant would be used to fund a campaign, to part fund a campaign to ensure a human rights compliant framework for abortion in Ireland and that would mean the repeal of the Eighth Amendment, changes in law. We then set out very, clearly…”

O’Rourke [interrupting]:. “OK That’s the case you’ve made at length.”

O’Gorman: “No in a page and a half summary we set out very clearly the activities that would flow from that and at that point SIPO responded to say that on the basis of all that information we were not required to register the third party and that was on the 13th of October, 2016.”

O’Rourke: “But the position has been reversed.”

O’Gorman: “A year later they reverse that decision with a month to go before that campaign ends and when, indeed as people will appreciate, we have gotten on and done the work that was funded and ruled legitimate a year ago..”.

O’Rourke: “David Quinn, what’s wrong with all or any of that?”

David Quinn: “Well SIPO has said that what Amnesty is doing is in breach of the law. And Amnesty has said ‘we’re not going to obey the law’.”

O’Gorman: “Then you do take money from America?”

Quinn: “You’ve had plenty of time to speak. One hundred and thirty seven thousand from Geroge Soros’ foundation, the Open Society and the same amount, by the way, to two other pro choice organisations. We are continually hounded about whether we get foreign funding and we field plenty of calls from journalists about this.

On this particular issue the media by and large, this programme being an exception because here we are debating it. and also the politicans have been the dog that didn’t bark. They have said practically nothing about this.

When Declan Ganley appeared on the scene in 2007 to campaign against the first Lisbon Treaty he was hounded from here to kingdom come about where he was getting his money from and whether it was foreign-sourced and was told continually that he was breaking the law – and he was SIPO-compliant – and this story went on for about a year.

The Irish Times pursued it. RTÉ pursued it. Prime Time had a big documentary about it and here we have no fuss whatsoever about this story. It has been treated by the media about as important as tax evasion by a minor celeb.”

O’Rourke: “On the question of the ruling by SIPO [ to Mr O’Gorman] you don’t like it. You say it’s a reversal of the position adopted a year ago but nonetheless they have a statutory responsibility to implement the law and presumably you beleive in adhering to the law?”

O’Gorman: “We believe in the rule of law absolutely and we believe that this decision by SIPO is deeply flawed on a number of levels. First of all, we think the principle upon which they have approached the law is deeply flawed and likely illegal if not under Irish law at least under international law.. .

O’Rourke: “Why don’t you see a judicial review?”

O’Gorman: “What I have said is, we will not comply with the instruction because it gravely violates freedoms and human rights.”

O’Rourke: “Who is the arbiter?”

O’Gorman: “…and that we will consider and use every available means that we can to challenge that decision. That clearly includes considering whether or not and if and how a legal challenge to that decision is the most appropriate way to do so. It is absolutely our right or anyone else’s right in this Ireland who if they have been the subject of an administrative decision by a regulator that they feel in unjust or unlawful to initially indicate…

O’Rourke: “But why don’t you take the view that you will challenge it as opposed to saying you won’t comply with it?”

O’Gorman: “What do you mean…Of course we’re challenging it as I have just said…”

O’Gorman: “Sean, we have repeatedly made it clear that we will challenge this by every means necessary. Now if people want to take a sentence and take it out of context and try and make a big drama out of it to get a bang too on radio, I’m not suggesting you are doing that, but that’s a matter for them. We’ve been really clear about our position. Now I want to respond to some of the things David said. First of all, it is not true that the three organisations got similar amounts. One of the organisations got a very small amount, was subject to the threat of criminal prosecution by SIPO and then returned it.:

Quinn: “This is the Abortion Rights Campaign?”

Quinn: “But it is nevertheless foreign funding for a political campaign…

O’Gorman: That’s one of the things you said that wasn’t true. The next thing that isn’t true..

Quinn: “You are being pedantic. They were receiving money from a foreign source for a political campaign which is against the electoral act.”

O’Gorman: If you make a point and it’s inaccurate I’m perfectly entitles to correct you. That was wrong.”

Quinn: “It was in breach of the law that’s why it was handed back.”

O’Gorman: “The next point is that if you are accepting an overseas donation, albeit from an irish citizen who is living in the states, that is a breach of the electoral act..”

Quinn: “If it’s for a political purpose.”

O’Gorman: “It is also the case that wehn Iona launched a campaign seeking funds for itsd Marriage Equality referendum in 2014 and suggesting for instance if we can get a 100 people to give us a 100 euros each…

Quinn: “It was SIPO compliant. You are not SIPO-compliant.”

O’Gorman: “Not when you launched the appeal, not when you were challenged about whether or not you would be SIPO compliant, you initially refused to register with SIPO.”

Quinn: “Why are you making it about Iona, We are SIPO compliant.”

O’Rourke:: “Are you drawing an equivalence between him theoretically getting a 100 euros from the states with you getting 137,000?”

O’ Gorman: I am trying to draw a link between someone who is telling us he believes the law is unjust and that we should comply with it? When he is making it very clear that he doesn’t.”

Quinn: We do comply with the law. We are SIPO comploiant. You arenot SIPO compliant and so far you are getting away with it.”