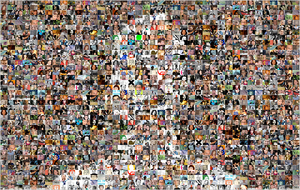 Maintaining a veil of privacy over your personal life – even on social media – has nothing to do with fear of scandal and everything to do with protection and the maintenance of clear lines of demarcation.

The personal is political or so the saying goes. But is that, or should that be, the case? Isn’t it perfectly acceptable to want to keep some things beyond the scope of inevitable scrutiny that comes from being in the public eye?

Or is there a legitimate expectation that every part of a politician’s (or aspiring politician) life be laid bare as required by the media outlet of the day?

The question I raise concerns itself more with the intimate details of one’s life rather than any public pastimes so before the commentators get carried away telling me that they have a right to know if someone is a member of the KKK or engages in some other type of behaviour which is likely to have a direct impact on their role in the public eye, then yes, I agree – fair game.

My question however refers to the truly personal.

As a woman I am repeatedly asked about my family status, perhaps that’s the same for men but I can’t be sure. When someone asks you directly ‘do you have children’ is it acceptable to say ‘I’d rather not say?’ and if not, why not? The same argument applies to any relationship? So far I have tried, wherever possible to keep my two worlds separate.

Why? I’m not 100% sure to be honest but I do know this, the scrutiny that comes from being in the public eye is not always pleasant and I’m loathe to subject anyone to it who hasn’t specifically chosen it.

I’ve chosen it therefore I’m good with it but would it be fair for me to open others up to the possibility of attention they may not desire?

For a while now I’ve been left with the distinct impression that my evasiveness on those type of questions is somewhat unacceptable and other times I’ve felt judgement for some perceived ‘disowning’ on my behalf.

We’re lucky here in Ireland that we don’t have a tabloid media as feral as Britain’s. As such we’re devoid of the regular ‘scandals’ regarding the personal lives of public figures but that’s not to say we don’t get the gossip type columns where innuendo and subtle clues point to the identity of the person involved.

Then there’s social media where speculation and finger-pointing comes with the territory. That’s one side of the coin but the less salacious, less obvious reason for maintaining a veil of privacy over your personal life has nothing to do with fear of scandal and everything to do with protection and the maintenance of clear lines of demarcation.

I tried to keep my personal Facebook page personal, but the friend requests kept coming and I now have people on there who are more colleagues than friends and so I’ve adjusted the personal content pertaining to others in my life accordingly.

This may mean that you’ll only see photos of me socialising with political friends – it doesn’t mean I don’t spend the majority of my life with those not in my political world, it just means you won’t read about it on Facebook.

During the recent General Election campaign I had a hugely positive campaign and response but there were blips. Unfortunately a woman becoming so visible in public life will always bring slugs from beneath rocks and I had some really nasty emails from clearly disturbed individuals.

I had hate mail from people who wanted me to not exist; I had ‘fan’ mail from delusional men who thought they were in love with me; and I had one or two ‘lovely girl’ emails with embedded rape threats.

I’ve even had one ‘nice’ man go to the bother of sending me an email recently to tell me ‘my lovely bum is too round for politics’ – though he did clarify that statement with the bracketed disclaimer (‘that’s a compliment by the way’) – well that’s alright so, thanks for that.

I brushed those incidents, and other similar ones, off without much of a second thought, I know what comes with the territory but my family and friends did not and so my unwillingness to involve them in that side of my life is not me choosing to pretend they don’t exist.

it’s me refusing to open their existence up to the same level of scrutiny that I’ve signed up for.