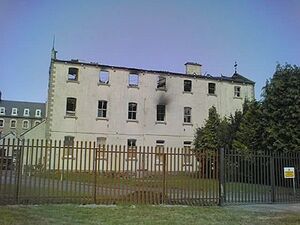 The Ombudsman has dismissed appeals from former residents of An Grianán training centre at the High Park Magdalene Laundry in Dublin to be included in the Magdalene redress scheme.

Further to this, Conall Ó Fátharta, in this morning’s Irish Examiner, reports:

“The decision, granted on June 2, came on the same day the Irish Examiner revealed that evidence that An Grianán training centre and High Park Magdalene Laundry were “one and the same thing” was uncovered by the HSE in 2012.”

“Former residents of An Grianán, which was excluded from the McAleese inquiry, were denied access to the scheme as it was not considered a Magdalene laundry. It was on the same site as High Park Magdalene Laundry in Drumcondra, Dublin. It was included in the Residential Institutions Redress Board Scheme.”

“…The Ombudsman has dismissed the appeals on the grounds that, although former residents of An Grianán worked in High Park Laundry, they were not directly admitted to it. The Magdalene redress scheme states women who “were admitted to and worked in one of the 12 institutions” could access it.”

Meanwhile, in a Justice for Magdalenes paper – entitled A Narrative of State Interaction with the Magdalene Laundries – Associate Professor James M. Smith, of Boston College wrote:

‘…the former ‘Boards of Health’ paid capitation grants to the Sisters of Our Lady of Charity for ‘Problem Girls’ sent to the An Grianán institution at High Park, Drumcondra.