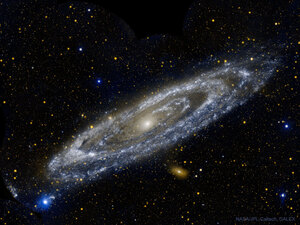 2.5 million light years from Earth, Andromeda is the nearest major galaxy to our own Milky Way. Right next door, in cosmic terms. To wit:

Spanning about 230,000 light-years, it took 11 different image fields from NASA’s Galaxy Evolution Explorer (GALEX) satellite telescope to produce this gorgeous portrait of the spiral galaxy in ultraviolet light in 2003. While its spiral arms stand out in visible light images, Andromeda’s arms look more like rings in ultraviolet. The rings are sites of intense star formation and have been interpreted as evidence that Andromeda collided with its smaller neighbouring elliptical galaxy M32 more than 200 million years ago. The Andromeda galaxy and our own comparable Milky Way galaxy are the most massive members of the Local Group of galaxies and are projected to collide in several billion years — perhaps around the time that our Sun’s atmosphere will expand to engulf the Earth. 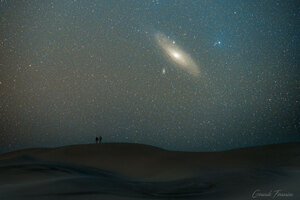 Behold: NGC 224, aka Messier 31, aka the Andromeda galaxy. And you can. With the unaided eye. Even though it’s 2.5 million light years away. To wit:

Most other apparent denizens of the night sky — stars, clusters, and nebulae — typically range from a few hundred to a few thousand light-years away and lie well within our own Milky Way Galaxy. Given its distance, light from Andromeda is likely also the oldest light that you can see. Also known as M31, the Andromeda Galaxy dominates the center of the featured zoomed image, taken from the dunes of Bahía Creek, Patagonia, in southern Argentina. The image is a combination of 45 background images with one foreground image — all taken with the same camera and from the same location within 90 minutes. M110, a satellite galaxy of Andromenda is visible just below and to the left of M31’s core. As cool as it may be to see this neighboring galaxy to our Milky Way with your own eyes, long duration camera exposures can pick up many faint and breathtaking details. Recent data indicates that our Milky Way Galaxy will collide and combine with the similarly-sized Andromeda galaxy in a few billion years. 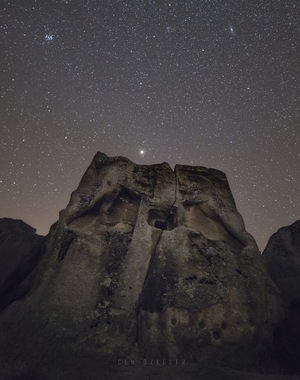 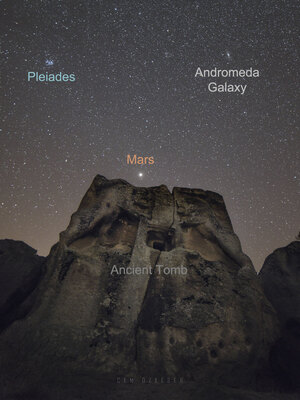 Behold: the most distant celestial object easily visible to the unaided eye – M31, the great Andromeda Galaxy, over two million light-years away. To wit:

Without a telescope, even this immense spiral galaxy appears as an unremarkable, faint, nebulous cloud in the constellation Andromeda. But a bright yellow nucleus, dark winding dust lanes, luminous blue spiral arms, and bright red emission nebulas are recorded in this stunning six-hour telescopic digital mosaic of our closest major galactic neighbour. While even casual skygazers are now inspired by the knowledge that there are many distant galaxies like M31, astronomers seriously debated this fundamental concept only 100 years ago. Were these “spiral nebulae” simply outlying gas clouds in our own Milky Way Galaxy or were they “island universes” — distant galaxies of stars comparable to the Milky Way itself? This question was central to the famous Shapley-Curtis debate of 1920, which was later resolved by observations favouring Andromeda being just like our Milky Way Galaxy — a conclusion making the rest of the universe much more vast than many had ever imagined.