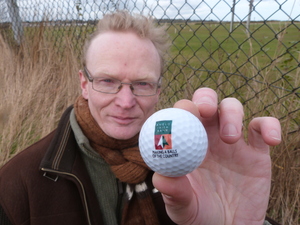 I would like to congratulate you on your recent acquisition with the purchase of the five-star Doonbeg Golf Resort in Co. Clare, Ireland. I have a little gift that I will be posting on to you at your head office in New York. It is a little present of a golf ball to you to mark the occasion of your recent purchase in Doonbeg. However, this isn’t any ordinary golf ball. This is an Anglo Irish Bank golf ball. Let me explain.

I see that you will be renaming it “The Trump International Golf Links, Ireland”. That is grand and it is nothing new to us here in Ireland because we have a habit of renaming venues to things like ‘02’ or ‘Bord Gais’. However, Donald, this might come across a bit strange to you but in Ireland we have had a problem with a particular new name but we all just remember it as the old name. It’s now called the ‘Irish Banking Resolution Corporation’ but we all still call it by its original name – “Anglo Irish Bank”. You see the idea was that if the name was changed we all thought it would help us forget the mess that this bank made on our nation! It is a long story Donald but without going into detail, this bank made a ‘balls’ of our country and we can’t get that name out of our heads. So Donald, this Anglo Irish Bank golf ball has lots of significance.

In some way it is a bit ironic because, just like your new golf club in Clare where the previous owners had to call in the receivers due to their unsustainable debts, the same thing kind of happened with this ‘Anglo Irish Bank’ but millions time worse! Anyway, the government here decided to step in and take over Anglo Irish Bank as they thought that it was better for the whole country to live in unsustainable debt instead of this bank.

But Donald, that’s not why I’m writing to you. I want you to have this golf ball because I wish you lots of success with this new golf club of yours and we welcome you to Ireland and your visit to ‘Trump International Golf Links, Ireland’. To be honest with you your timing has not been great with the bad weather we are having. We’ve been having lots of rain and it’s also been very windy. I’m sure that the wind farmers in Clare and elsewhere are delighted with all this wind but I think it is probably best if I don’t go into that subject with you as I know you have been having a bit of a problem in that department.

Donald, it’s only a small gift but at the same time I have to tell you that it’s a very rare one and you won’t find it anywhere – not even on eBay! These Anglo Irish Bank golf balls are becoming a collector’s item and the one I’m giving you is the deluxe model.

I had read a few years ago in one of our national newspapers, that during the ‘Celtic Tiger’, Anglo Irish Bank had spent over €208,000 on their personalised golf balls as well as €218,000 on ‘Anglo Irish Bank’ umbrellas and that there was only about 1,000 golf balls that still hadn’t been accounted for. I was flabbergasted to read in the same newspaper that at the time, the Anglo Irish Bank chief executive, Mike Aynsley, was still searching for these missing golf balls! Imagine that! I don’t play golf myself but Donald, it got me thinking that if the chief executive of the bank was looking for these golf balls then there must be something to this. Maybe he knew something I didn’t know. Donald, no joking, but it’s almost impossible to buy these original golf balls because they are so rare. I must admit I used to play a bit of golf myself but hadn’t a clue how to swing a club. I was always losing my golf balls and ended up spending half my time looking in the rough for them. Without bragging, I think I’ve become a bit of an expert at finding lost golf balls so I thought I would use my golf ball searching skills to make a bit of money now.

We had a big thing here in Ireland last year called “The Gathering” to encourage people to come to visit Ireland and loads of people got involved in so many different ways. While all that was going on, I did a bit of my own gathering and, just like the Anglo Irish Bank chief executive, Mike Aynsley, I’ve been looking for these ‘Anglo Irish Bank’ golf balls. Donald, you won’t believe it I have found loads of them. Without giving too much away, the trick to finding them is to go into the golf courses where you think that is where the property developers and speculators and senior bankers might be playing their golf and you have a great chance of finding them in the rough.

I’m delighted to say that I have loads of them now and even selling them in my shop. So I wanted to give you one to mark the occasion of your new golf course in Co. Clare.

Can I just say one other thing Donald and it probably goes without saying with anything you get from the bank: make sure that you read the small print on these golf ball.*