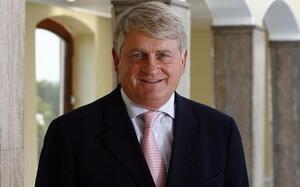 And sure why wouldn’t it be?

“A company [Another 9 or A9 Business Recovery Services] backed by billionaire Denis O’Brien is being paid substantial sums of money to protect Irish Water’s website from “severe” cyber attacks, with six serious incidents identified in just five months alone.”

“…The company is chaired by Leslie Buckley, an O’Brien associate, who is the chairman of Independent News & Media. Shareholders in the company are Baycliffe, an Isle of Man investment company used by O’Brien, and Steve O’Brien, a businessman.”

“The full cost to the State of services provided by the company – including hourly rates charged by security engineers – has been redacted by Irish Water citing confidentiality reasons. The documents state the “yearly charge” for “hosting and security charges” is €1.2 million to Ervia over five years. It does not appear to include other potential charges.”

“…Another 9 lists O’Brien’s company Digicel as well as AIB, Volkswagen and Pioneer Investments as among its clients. The company’s website describes O’Brien as “shareholder” and as “one of Ireland’s leading entrepreneurs”.”