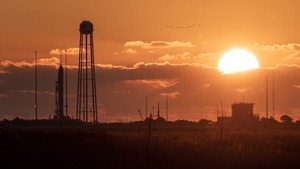 The launch of an Antares rocket (packed with three and a half tonnes of supplies for the International Space Station) from NASA’s Wallops Flight Facility in Virginia captured earlier this month in all its fiery glory by photographer John Kraus.