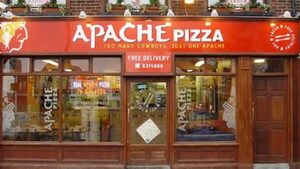 A NORTHSIDE community activist has vowed never to use a city pizza firm again after claiming it refused to deliver to his home in Delmege Park [Limerick].

Christy Duhig says when his 18-year-old daughter Kelsey attempted to order a take-away from Apache Pizza, based in Henry Street, she was told that she would have to walk to 15 minutes to Watch House Cross at the entrance of Moyross.

He believes the national take-away company, which has more than 80 branches nationwide, is discriminating against people from Limerick’s regeneration areas.