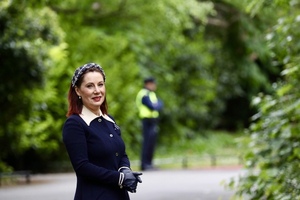 There was a Q&A in the Dáil recently (May 14) between Paul Murphy TD and Minister for Culture, Heritage, and the Gaeltacht, Josepha Madigan, on the subject of arts funding.

In his statement Paul Murphy said that Fine Gael seem only to pay lip service to the value of the arts, justifying poor funding for the arts as “realism”.

The first sentence of the minister’s response to Murphy’s question, in true neo-liberal eff-you style, featured the phrase “reality check”, followed by some figure juggling, a false comparison with Britain’s Covid-19 welfare payment, and a disingenuous claim that arts workers are receiving the highest share of Covid-19 payments, “after workers from accommodation, construction, administration and the retail sectors.” So, not the highest.

It was a typical and tiresome neo-liberal dodge. But what was clear was that the question concerning the value of the arts, was being answered from a value system in which the arts and humanities don’t really have a place. Neo-liberalism is “reality” and the Arts are… not reality.

Arts are part of the cultural eco-system known as the Humanities. Neo-liberalism would have you believe that you can pick the “best” from this eco-system, and promote just those choice parts, for dreary profit. But this, like much of neo-liberal ideology, displays the brute ignorance at the heart of that ideology.

You can’t pick and choose which items to promote and flog off in an eco-system. It’s all interdependent. It’s like saying that, in sport, we’ll only have a Premier league and no lower leagues or school leagues.

As soon as you do that, you destroy the system that feeds and nurtures the “best”. The entire eco-system is the “best”. In the Humanities eco-system, it is the activity of the arts and sciences, at all levels, that is of value, not the best-selling “product” that occasionally emerges from arts and science activities.

Creativity is the foundation upon which the capitalist profiteering engine was built.

This cultural power base formed in a slow accretion of various inventions, discoveries and insights across the ages; the result of an accumulation of imaginative activities that are quintessentially human, from which emerged the multitude of creative ideas, engineered into physicality, that gave rise to the modern world and modern technologies.

Neo-liberal capitalism, standing on the shoulders of this complex network of collective accumulated creative triumphs, often seems as arrogantly blind to that eco-system’s contribution to its own power base, as it is blind to the connection between the perpetual growth ideology it champions and impending climate catastrophe.

Neo-liberalism, in the long game of cultural intelligence, may be just a fancy name for stupid.

To Have Or To Be

Erich Fromm, the humanistic philosopher, in one of his later books, “To Have Or To Be”, defined a neat paradigm to illustrate two broad ways of being that are in conflict with each other in the capitalist system.

He wrote that humanity is oriented either towards “Having”, which is capitalism; or towards “Being” which is, broadly, the orientation that defines the Humanities.

The arts, far from being airy fairy fringe activities, are actually central to the human project. Through the arts, progress is imagined. This has been the case since cave paintings gave every tribe member the opportunity to study the animals they would hunt, aiding in focusing their attention and creating an inner mental picture of the target; the artist providing details that the non-artist may not even see in “reality”.

When artists unwittingly play the capitalist game and set out to justify themselves on capitalist grounds, accepting the capitalist restrictive value system as “reality”, they surrender the one quality that makes art truly invaluable: the ability to explore and think freely and objectify the “reality” that society has chosen for itself.

But in neo-liberal reality, the space occupied by the Humanities is perceived as being without real value. This is dangerous, because it must soon follow that predictions and warnings arising from humanistic studies will be deemed as equally without value as the activities that produce them, effectively blinding the culture to its own future, depriving it of the core intelligence it has always relied on for survival.

Pretty soon no one is working any more until they get paid a capitalist wage or are funded by a government throwing scraps to the sector, and practices become rusty.

Artists may gravitate towards sycophancy, further weakening the cultural objectivity the sector is supposed to provide. The grassroots of creativity begin to wither and die from neglect, not unlike the manner in which a coral reef might die.

Neo-liberal Capitalism is as wasteful of humanity as it is of any of the other raw materials it crushes and processes to turn its quick profits. In terms of the use and exploitation of native talent, the capitalist system treats human beings like objects of mass production.

It squeezes individuals into tight restrictive imagination-killing “jobs” – because the concept of a job is a capitalist value – and in doing so wastes all that is potentially creative in that individual.

When you devalue the Humanities by assessing their usefulness in a bogus value system, as neo-liberals do so casually and so routinely, you not only devalue that cultural eco-system that includes the arts, you also simultaneously promote ignorance and forgetfulness; the most extreme form of this regression being the Trump administration.

This ushering in of ignorance is a natural end-game for such a market-driven ideology as neo-liberalism.  From neo-liberal capitalism’s point of view, ignorance and forgetfulness are good for markets, since you can re-package and re-sell as new what was already known and then forgotten about.

In this context, asking What use are the Arts? Or attempting to convince neo-liberals of the value of the arts, may be the totally wrong approach, since this approach takes place in the restrictive confines of neo-liberalism’s narrow understanding of “reality”.

Maybe it’s not so much that society needs to support the Arts, nor that the Arts need to become “realistic” by neo-liberal capitalism’s values; Maybe it is that society, if it hopes to avert climate disaster, needs to reorient, as Fromm recommends, and become more like artists and creatives.

The autistic savant Temple Grandin said in a Ted Talk that the world now more than ever needs all kinds of minds, all kinds of imaginations to solve the problems we are facing.

She knew that in the so called “normal” world that her kind of mind, and minds like hers, were being side-lined, measured only by their monetary potential.

But she is a genius in visualising physics. She sees the arcs of physical movement in the natural world as vividly as you or I see objects in the living room. She can visualize the invisible. And yet she is ranked as second-best in a world measured by economic profit alone.

To not support the arts and sciences is to fling away as useless the potential of the human imagination, the same one that invented the civilization now apparently owned by a couple of hundred billionaires.

The real question to be asking, more glaringly obvious since the advent of the coronavirus, might be, what use is neo-liberal capitalism? 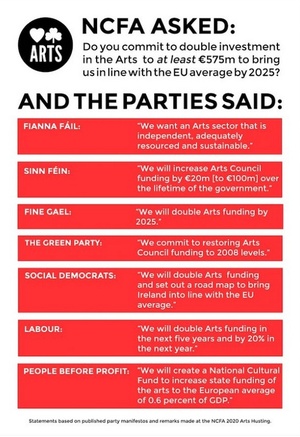 National Campaign For The Arts Ireland