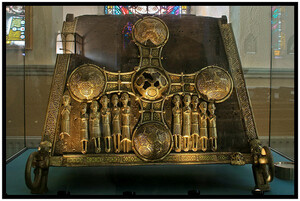 St Manchan’s Shrine, an intricate bronzework, was stolen this afternoon.

Suspicions were raised about a car that was seen in the area, travelling between Boher and Shannonbridge. Two males were subsequently arrested on the M5 at Ronanstown, Co Dublin, and were taken into custody.

The men are being transported back to Tullamore Garda Station for questioning in relation to the theft.