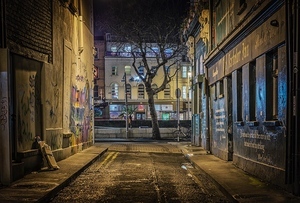 By photographer Andy Sheridan (more of his laneway pics at link below) writes:

In various old maps I have also seen it called Williams Lane and also Williams Row.

It is by Williams Row that it gets a brief mention in Joyce’s Ulysses): ‘Mr Dedalus, tugging a long moustache, came round from Williams’s row. He halted near his daughter.’

Far from such literary heights, it’s a laneway all too often occupied by junkies and smells too much like a sewer for my liking. It’s not one that I care to venture down very often…