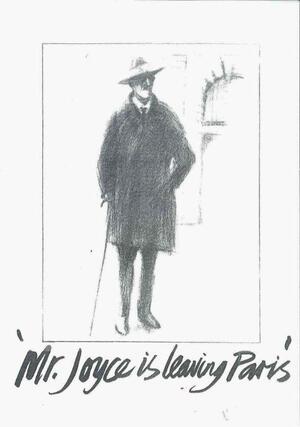 The play Mr Joyce Is Leaving Paris, by Tom Gallacher, is being performed every evening in the Back Loft Theatre (7-11 Augustine Street, off Thomas Street) except Sundays, until August 24.

“Mr Joyce is Leaving Paris is a play about James Joyce when he was living in Trieste in Italy with Nora Barnacle and their children.  He was teaching in The Berlitz College and was also the opera critic for the local newspaper.  His brother Stanislaus comes from Dublin to support them as they were living in dire poverty while Joyce was drinking and not writing.

“The second part of the evening is set in Paris in 1939 as the Germans are advancing on Paris and Joyce is about to travel to Zurich in Switzerland.  He is now an ageing, nearly blind man and he is confronted by ghosts/friends from his past that he has used in his famous novels –Ulysses, Finnegans Wake, and The Portrait of The Artist As A Young Man.”