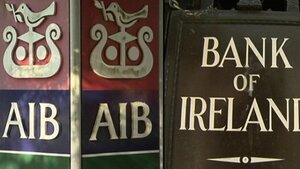 In the event of a bail-in, the government and banks are likely to seek to impose deeper haircuts on creditors including depositors in order to bail-out and protect the failing banking system, writes Mark O’Byrne, of Irish gold brokers Goldcore,

Deposit bail-in risks are slowly being realised in Ireland, after it emerged overnight that FBD, one of Ireland’s largest insurance companies, have been moving cash out of Irish bank deposits and into bonds.

Revelations regarding deposit bail-in risks came in the wake of warnings of a new property crash centred on the housing market in Ireland. The former deputy governor of the Central Bank warned in an op-ed in a leading international financial publication, Project Syndicate, that Ireland is at risk of another housing market crash.

Insurer FBD has moved over €150 million out of the Irish banking system and into corporate and sovereign bonds over the past year. The move was prompted by low returns offered by bank deposits and the risks that deposit bail-in rules could see deposits confiscated.

“extremely low returns offered on term deposits by banks, coupled with fears that new bail-in rules introduced this year by the European Union could expose bank bondholders and depositors to bailing out a failed lender, meant it has shifted investments away from banks.”

The new deposit bail-in mechanism is designed to protect banks and is touted as a way to prevent taxpayers being liable for bailing out collapsed lenders. It is believed that it leaves bank bondholders and deposit customers with more than €100,000 on deposit at risk of footing the bill.

There is a belief that bail-ins only relate to “the wealthy” and “rich” depositors as they will be imposed on those with deposits greater than national deposit guarantees.

These deposit “guarantees” are generally the ‘big round’, arbitrary number of say €100,000, $250,000 and £75,000. These are not particularly large amounts and could amount to the entire life savings of a pensioner, a family or indeed it could be the entire capital of a small to medium size business enterprise.

An example of this is the UK where the deposit guarantee was arbitrarily, suddenly and with little fanfare quietly reduced from £100,000 to £75,000 just last year in July 2015.

Thus, it is important to note that the arbitrary round number in the various government deposit guarantees can be, and probably will be, reduced to a lower number – say the new round number of €50,000, £50,000 and $50,000 – depending on the severity of the next banking crash.

….FBD’s deposits with Irish banks were reduced from €451 million to €305 million in recent months. FBD made a €3.1m loss in the first half of the year….