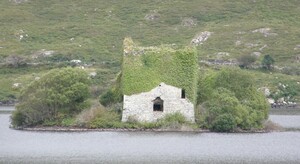 The property included a castle ruin in an island on Ballynahinch lake.

This island was the seat of the Conmaicne Mara and the O’Caodhla before it was taken over by the O’Flaherty in the 12th century. The Martins were granted the land in the 17th century and an extension was erected by ‘Humanity’ Dick Martin to facilitate a gaol in the 18th century.

Concerns have been raised since a scaffold was erected around the island castle in recent weeks and works appear to have begun on the ruins. Local historians, archaeologists and wildlife enthusiasts have expressed serious concerns about this development.

‘It is not clear whether planning permission for the work is necessary, has been sought, approved and what restrictions pertain to that. Galway County Council need to clarify this immediately.

‘It is not clear either whether the National Monuments Service have given their approval for the development and if so what safeguards were requested to maintain the integrity of the site.

‘It is understood that the castle is also in a Special Area of Conservation and that there are a number of protected habitats on the site.

Does Denis O’Brien have permission for works on his Connemara Castle? – Ó Clochartaigh (Sinn Féin)