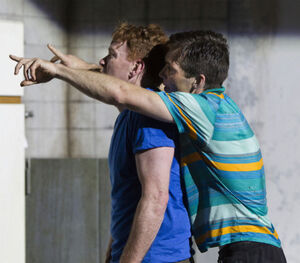 What do you mean you ‘weren’t invited to the first night’?

“I once went to see Nicole Kidman in a play in the Donmar Warehouse. I remember only two things about it. One is that she was totally naked on stage, and the other is that someone offered me a thousand pounds for my ticket. But I did not sell it. I simply had to get in to that play, I needed to have been there.
Ballyturk is currently generating this kind of frisson. It stars Cillian Murphy and Stephen Rea, it is directed by Enda Walsh, who cares what it’s about? Who cares if it turns out to be boring? Or plotless? (as a playwright friend suggests it will be) You get to see Cillian Murphy in his underpants a lot, and they are practically see-through. The Olympia is jammed, and the audience does not look like regular theatre goers.
Domhnall Gleeson is sitting next to us. He accepts a Malteser, but refuses to lend us his programme in return, because he feels that we should allow the play to happen without any pre-conceptions about it.
He is right. I have absolutely no clue what the play is about when we sit down and half way through I still have no idea what is happening nor can I predict what will happen in the end.
But it is not plotless. Neither is it boring. It is in fact quite the opposite. It is one of the best plays I have ever seen. It is mesmerising. It has the surreal comedy of Flann O Brien and the pacing and theatrical genius of Martin McDonagh, but it is also tragic and brutal. Every human emotion is here, and you will not escape any of them. A chap next to us runs out sobbing.
It would be wrong for me to reveal any of the story. Suffice it to say that the play is magnificent in every way that a play can be magnificent. The acting, the directing, the lighting, the sound, the costumes, all are superb. And Cillian Murphy can be seen in his underpants.”

Ballyturk at the Olympia (Olympia)