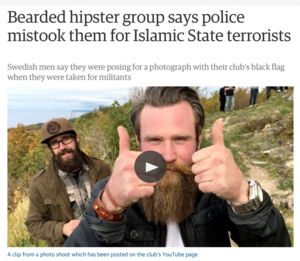 A club of bearded men posing for a photograph in the Swedish countryside with their black flag was mistaken for Islamic State militants, prompting a visit by the police, a club member has said.

Andreas Fransson was with his friends on Saturday outside the ruins of Brahehus castle in southern Sweden when two police officers turned up.

“They told us that a motorist thought he had seen a gathering of Isis terrorists,” said Fransson, whose Bearded Villains organisation does charity work.