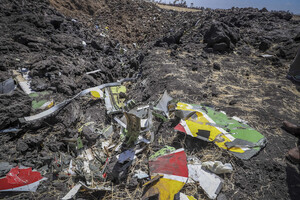 From top: The Nairobi-bound Boeing 737 crashed six minutes after take off from Addis Abba Bole airport killing all 157 on board; A warning from the US Embassy in Ethiopia to staff about movements around the capital, Addis Ababa

The U.S. State Department reversed a March 8 travel alert for Americans traveling in Ethiopia just hours before the fatal crash of Ethiopian Airlines flight 302. The update reversed a warning to Americans from traveling into or out of Addis Abba Bole airport on Sunday, March 10.

Several airlines have grounded Boeing 737 Max 8 jets following a deadly Ethiopian Airlines crash.The flight crashed minutes after takeoff on Sunday, killing all 157 people on board. It was the second disaster in five months involving a Boeing 737 Max 8.

US warned its citizens to avoid airport over protests (The Standard.ke)