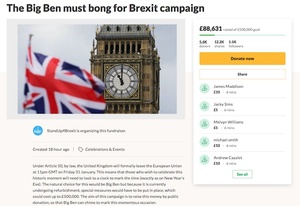 The clanging chimes of doom?

Or reverberating bongs of freedom?

The hopes of diehard Brexiters to hear the chimes of Big Ben sound at the moment the UK leaves the EU appear to have finally been dashed by Downing Street, as it indicated this will not happen even if the public raises the £500,000 needed to pay for it.

According to Boris Johnson’s spokesman, Commons authorities – who warned on Tuesday of the high cost of completing the complex restoration of the clocktower – have said there could be difficulties in accepting public donations.

Big Ben unlikely to chime on Brexit day, No 10 indicates (The Guardian)

The Big Ben must bong for Brexit campaign (Gofundme)