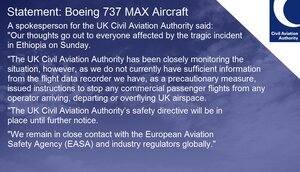 The UK Civil Aviation Authority has issued instructions to stop any commercial passenger flights from any operator arriving, departing or overflying UK airspace.

You can read the full update online [here].

The move follows similar bans of the aircraft in Australia, Singapore, China, Indonesia and Malaysia. 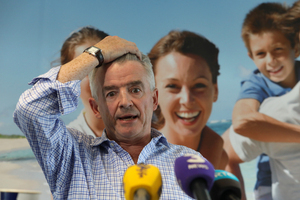 “It would not surprise me at all if the Irish Aviation Authority followed suit. The main airline using the jet, both in Ireland and in the UK, is Norwegian. TUI Airways also have some.

“But crucially Ryanair has the biggest order in Europe: 135 of those jets. They do not start flying until May.”

Norwegian temporarily suspends flights with the Boeing 737 MAX 8, following recommendations by European aviation authorities. We will do our upmost to take care of our passengers in the best possible way. https://t.co/kZICrrRGsN