Following our post on the Philip Cairns case and a follow up post on the death of John Horgan many have asked about a sacristan mentioned in the Cairns timeline.

Thirteen days after Philip’s disappearance the body of Brendan Houlihan was discovered in the Royal Canal in Phibsborough, Dublin 7

A sacristan arranges the liturgical books, vestments, and other items necessary in the celebration of Mass.

Brendan had been sacristan for eight years at St Columba’s and, before that, an altar boy. News reports described him as ‘quiet and shy’.

On the afternoon of his death Brendan had been checking the baptismal register for Philip Cairns’ name, according to then parish priest Monsignor Tom Fehily.

Monsignor Fehily was the curate in charge of Pope John Paul II’s visit in 1979.

He was also well known for his work with Travellers. In 1975 he was instrumental in founding Trudder House, a refuge for Traveller children, in Newtownmountkennedy, County Wicklow.

Trudder House was eventually closed in 1995 and a Garda investigation commenced into allegations of child sexual abuse dating back to its founding.

The Cairns family and the Houlihans lived close to the church. Brendan lived, with his parents Michael and Bridie, on St Brigid’s Road while the Cairns lived on the parallel St Columba’s Road. The Cairns moved to Rathfarnham in 1978 when Philip was five.

Brendan left St Columba’s church on his bicycle at approximately 8.45pm on Wednesday, November 5, 1986, to deliver letters on behalf of Msgr Fehily to an unnamed family in the parish, according to the Monsignor.

Brendan’s body was discovered at 10am the next day, Thursday, November 6, in the Royal Canal at Cross Guns Bridge, Phibsborough, about two minutes’ cycle from his home.

Brendan had been beaten, stripped naked and gagged. His shirt was tied into a granny knot and placed in his mouth before he was thrown into the canal.

His body was discovered by businessman Des Kelly, of Des Kelly Carpets, according to reports in the Irish Independent and the Irish Press.

However during the eventual trial it was stated that the body was found by CIE workers while the inquest was told Brendan was discovered by gardaí with no mention of Mr Kelly.

In the afternoon, following the discovery of Brendan’s body, two brothers, John and Declan Kenna were arrested on a bus in Parnell Square, Dublin 1 for drunken behaviour.

A Garda detective later reportedly noticed one of the brothers wearing an anorak similar to that worn by Brendan when he was last seen.

That evening, at a special sitting of the District Court in the Bridewell prison John Kenna, aged 23, and Declan, aged 16, were charged with the murder of Brendan Houlihan.

Unusually, despite the savagery of the attack, both were freed on bail.

Then, in October, 1987, the murder trial at the Central Criminal Court before Justice Donal Barrington was stopped when Kevin Haugh SC, acting for the prosecution, told the court that the DPP had agreed to drop the charge of murder against John Kenna, who would instead plead guilty to the lesser charge of manslaughter.

Declan Kenna would be only charged for the robbery of clothing and a watch.

The law of manslaughter then and now – as defined by the Law Reform Commission in their Report on Homicide (2008) – recognises two types of manslaughter.

The first is voluntary manslaughter, where there is an intention to kill but the accused is either provoked or acting in self-defence.

The second is where there is no intention to kill on the part of the accused, but they have caused the death of another person as a result of a criminal act carrying with it the risk of bodily harm or in circumstances where they were grossly negligent as to that person’s life.

No evidence was put to the court that either of the Kennas were acting in self-defence. Nor was there any evidence proffered that their attack had been provoked in any way by Brendan Houlihan.

On the contrary, Mr Haugh informed the court that the brothers set upon Brendan as he cycled along the banks of the canal. They had drunk a ‘gallon of cider’ and demanded money from the sacristan.

In circumstances where the accused, no matter how drunk, had first badly beaten up a man and then thrown him into the canal gagged, it is hard to see how it could be argued that they did not have intention to kill.

Plea-bargaining is not a feature of Irish law and why it appears to have been engaged in in this case is as hard to understand as the apparently motiveless attack on Brendan Houlihan.

Previously: Philip Cairns And A Trail of Disinformation

The Devil Is In The Details 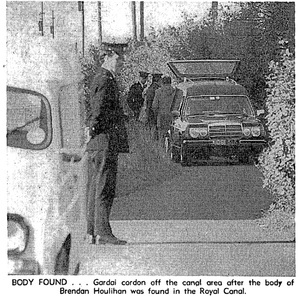 Below is a detailed timeline before and after the death of Brendan Houlihan. We will correct any errors/omissions.

November 7, 1986: It’s reported that a ‘full-scale murder hunt’ is under way in Dublin following the death of 26-year-old Brendan Houlihan whose body was found partially clothed in the Royal Canal at around 10am on November 6.

Wearing just underpants and a shirt, Mr Houlihan, of St Brigid’s Road Lower in Drumcondra, had a shirt sleeve stuffed in his mouth when he was found by Des Kelly, of Des Kelly Carpets. His dark grey trousers and black leather jacket are reportedly missing.

It’s reported that he “was last seen alive around 10pm on Wednesday as he walked his bicycle near Crossguns Bridge, Phibsboro – only a short distance from where he was found”.

Elsewhere, it’s reported that Mr Houlihan “locked up the church around 9pm on Wednesday and went to deliver some church letters.”

Brendan didn’t have any money on him and the only items in his possession were the letters that he was delivering for the parish priest of St Columba’s Church, Iona Road, Monsignor Tom Fehily. These were reportedly found floating on the water around his body.

It’s reported that Mr Houlihan had attended evening mass on the night he died, but no time for the mass is given. It’s also said that he didn’t reach his destination before he died.

Mr Houlihan – the son of Michael and Bridie Houlihan and brother to Margaret, aged 22 – is described as a “gentle young man to whom the church was his whole life”.

Monsignor Fehily is quoted as saying:

“Nobody can remember him ever being unhappy. Today even children called here, hysterical. People are absolutely devastated. I have never seen such widespread grief and shock.”

November 8, 1986: It’s reported that John Kenna, aged 23, is charged at a special sitting of the District Court, in the Bridewell with the murder of Mr Houlihan.

December 6, 1986: A notice appears in the Irish Press in which the parents and sister of Mr Houlihan thanks those who shared in their loss. They extend special thanks to the Archbishop of Dublin Dr Kevin McNamara, his coadjutor bishops and Monsignor Fehily. The pupils of Iona Road School, who formed a guard of honour at Mr Houlihan’s funeral, the staff of CIE, the Gardaí and members of Dáil Éireann are also thanked.

October 20, 1987: It’s reported that the murder trial that was due to take place in the Central Criminal Court “came to an abrupt end when the State accepted a plea of manslaughter from one of two brothers accused of the murder of a sacristan [Brendan Houlihan].”

John Kenna, now described as 18, plead guilty to the manslaughter of Mr Houlihan before Mr Justice Donal Barrington and State prosecutor Mr Kevin Haugh, SC, told the court that, in accepting John Kenna’s plea, the State was entering a nolle prosequi [essentially dropping the charge of murder] against his brother Declan Kenna, aged 23.

It’s further reported that two brothers pleaded guilty to “the robbery of an anorak, a pair of trousers, a jumper, a pair of shows and a watch from Mr Houlihan on the same date.”

The two brothers are remanded in custody for sentencing.

October 21, 1987: It’s reported that John Kenna, now described as 24, is jailed for 10 years and given a concurrent four-year prison sentence for stealing Mr Houlihan’s clothes and watch. Declan Kenna, reported now as being 17, is jailed for three years after pleading guilty to robbery.

The Central Criminal Court hears Mr Houlihan was cycling along the banks of the Royal Canal when the Kenna brothers “who had consumed almost a gallon of cider and were drinking on the canal banks asked him for money”.

Mr Kevin Haugh SC told the court that John Kenna stripped Mr Houlihan of his clothes and used his shirt to gag him.

Superintendant Patrick MaGuinn, of Fitzgibbon Street, told the court that State Pathologist Dr John Harbison found “large areas of extensive bruising over all areas of Mr Houlihan’s body. He had suffered serious blows to the head and had six fractured ribs.” In addition “there were signs of asphyxiation and drowning and it appeared Mr Houlihan was in the process of asphyxiating when he was thrown or fell into the canal”.

While reportedly sentencing John Kenna, Justice Barrington says, “It is to say the least distressing that an innocent citizen could be going along the canal and meet somebody like you maddened by cider savagery.”

It’s further noted, “The judge told Declan Kenna that he had taken into account the fact that he was only 16 at the time of the attack and that his role had been minor.”

December 4, 1986: An inquest into Mr Houlihan’s death, before Dr P.J.Bofin, hears that Mr Houlihan was found by gardaí and that “a granny knot in the shirt had been tied round his head and stuffed in his mouth. He had suffered broken ribs and a head injury”.

Dr Bofin recorded a verdict of death due to asphyxia and drowning.

In addition, it’s reported that “The court was told by a Garda that two people had been jailed in connection with the incident – one had been jailed for manslaughter for 10 years and another for four years, on a charge of robbery.”

April 24, 1988: It’s reported that “18-year-old” Declan Kenna who “was serving three years for a combination of offences, including robbery and was due for release next October” escaped from Mountjoy Prison on the night of April 23 during a prison officers’ strike.

April 20, 1990: It’s reported that Declan Kenna, reported to be in this twenties, has been stabbed in the face with a kitchen knife after a row at his home on Cremona Road in Ballyfermot. Unnamed “local gardaí”, who were reportedly “earlier called to a disturbance at the house” are quoted as saying, “A bitter feud was behind the incident. Mr Kenna lost a lot of blood and was quickly taken to St James’s Hospital”.