We have info from the BII that the person who blackmailed them into cheating us out of our award them was a VERY senior Diageo team member. 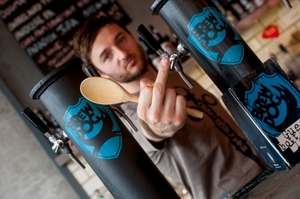 This story may help.

Independent beer maker BrewDog were expecting to do well at Scotland’s BII awards (for the licenced trade) at the weekend, sponsored by Diageo.

However we were not announced as winners of the award. This disappointment was further compounded when one of the judges (seated at our table) told us in disbelief ‘this simply cannot be, the independent judging panel voted for BrewDog as clear winners of the award’.

Events took a further twist when the people who got given the award refused to accept it as it clearly had ‘BrewDog’ engraved on the trophy as winners.

On Tuesday, 2 days after the award, I (James) took a phone call from Kenny Mitchell, Chairman of the BII in Scotland and Chairman of the Award Committee explaining the situation. To directly quote Kenny:

‘We are all ashamed and embarrassed about what happened. The awards have to be an independent process and BrewDog were the clear winner’

‘Diageo (the main sponsor) approached us at the start of the meal and said under no circumstances could the award be given to BrewDog. They said if this happened they would pull their sponsorship from all future BII events and their representatives would not present any of the awards on the evening.’

We were as gobsmacked as you by Diageo’s behaviour. We made the wrong decision under extreme pressure. We were blackmailed and bullied by Diageo. We should have stuck to our guns and gave the award to BrewDog.‘