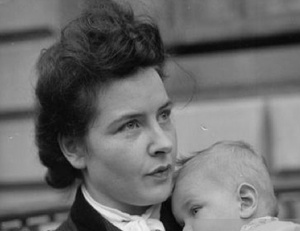 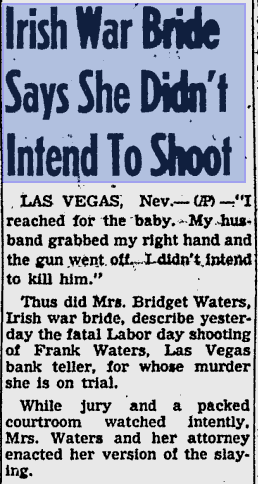 She killed her man with a baby in her arms.

Bridget Waters, a nurse from Cootehill, Co Cavan, was one of the many Irishwomen who married GI’s during World War Two. Sadly, things did not work out for Bridget and her husband Frank, who spurned her for a showgirl not long after their marriage in 1944.
Having flown the Atlantic to contest his divorce application, Bridget pulled no punches about Frank in this interview with the Stars and Stripes Newspaper, from April 1946:
“After I wrote him that I had a baby,” she said, “he replied saying the marriage was a mistake. He added he would send me $50 a month. I’ve got those letters and others. He can’t get away with this.”
He didn’t.
In September of the same year, Bridget shot Frank dead in Vegas with a three-inch pistol while holding their baby in her arms.
She told a packed Nevada courtroom that ‘the gun went off in my hand… I didn’t mean to kill him.’
Bridget was subsequently convicted of involuntary manslaughter, and sentenced to one to five years in prison. She was released after 10 months for good behaviour. Bridget did get denounced by one woman on the basis that men are too scarce to go around killing them off…