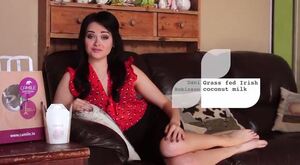 Dublin-wide carryout and delivery chain Camile Thai Kitchen has announced, that after extensive testing, it is launching Ireland and Europe’s first locally produced Coconut milk. The chain has developed a novel way of producing coconut milk, a key ingredient in its authentic curries. Developed in conjunction with a team of experts from Teagasc, Bord Bia and Science Foundation Ireland, the revolutionary technique involves substituting hay in the diets of Irish Dairy cows with fresh coconuts. The result is a delicately flavoured coconut flavoured milk, rich in energy and protein. Produced on Causey Farm near Kells, Co.Meath, Camile’s unique Irish Coconut milk, is believed to be a European first.

If only Chris De Burgh was alive to see this.