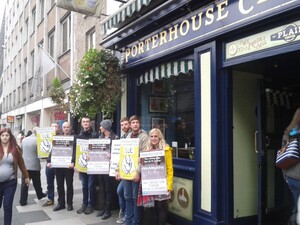 You may recall the campaign group Work Must Pay.

Its members have been protesting outside businesses which use JobBridge to hire staff.

The group has ceased campaigning in Dublin…for now.

“A brief scroll through the #WMP Campaign Updates page will provide enough evidence to show that directly challenging businesses was a very effective way of knocking out JobBridge placements.”

“The reasons for this were established in correspondence with exploiters where it became apparent that: (1) most were taking on a JobBridge intern because they didn’t expect it to become public knowledge, (2) they regarded free labour as an entitlement because their competitors also used it. Making it public knowledge that a company was using JobBridge usually shook their confidence and then the subsequent #WMP protest convinced them that it really wasn’t worth it.”

“…Our FOI request highlighted that over 16 thousand businesses and organisations have used JobBridge interns. This points towards an endemic level of exploitation which has permeated every sector of employment and even included unionised workplaces.”

“We never claimed that #WMP was a solution; just that it would eliminate internships, build confidence among young activists and educate young workers about their rights. However, a response to this problem is still badly needed nationally.”

“Many unions have publicly condemned JobBridge but their organised workplaces have used interns and these employers haven’t been challenged. It is obvious that this situation needs to be remedied immediately.”

“Regarding political parties, the danger is that JobBridge will not be abolished but ‘reformed’ into a ‘fairer’ system down the line. We view this as an unacceptable argument as unpaid labour has lowered the bar so far that young workers now aspire to a minimum wage and view anything above it as an unexpected bonus.”

“The very nature of work, what we expect from it and our rights has been changed by JobBridge.”

#WorkMustPay: A Campaign Ends, The Struggle Remains (Work Must Pay)