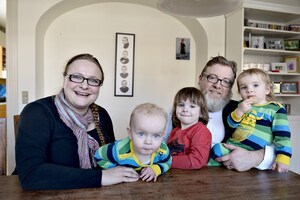 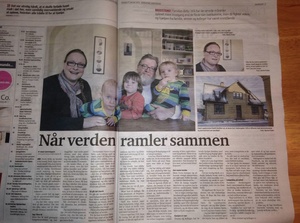 Top: Dort and Dom Kelly and from left: Jake, Luke and Josh. Above: Danish newspaper Nordjyeske .

An expat in trouble…

These are my good friends Dorte and her husband Dom Kelly. I first met Dorte in 1999 when she lived and worked here in Dublin. She was one of the nicest people working in HMV on Henry Street. She met her future husband Dom, who originates from Tallaght. They moved to Dorte’s home country of Denmark in 2003 and they got married in 2004.They have since had the wonderful Luke (aged 3) and twins Jake & Josh (aged 18 months).
Recently Dorte had invasive surgery to remove 3/4 of one lung to save her from lung cancer.They then lost their house to a very serious and dangerous mould, which their home insurance wont cover. Their luck has been horrendous. For them and their three boys, two of whom have their own health problems.
They are stuck, they are running out of money to pay the rent for their new accommodation. They need to either fix their current house, which is now worthless due to the mould but still paying a mortgage on. Or find a new house to buy. Both options need money they don’t have.
Dorte’s work colleague have set up this fundraiser to help.
Their full story can be found here (see fundraiser link). Trust me when I say you won’t me nicer people than the Kelly’s of Vrå. And I want to help them. I hope you can too. Even if it’s just a Euro, I know Dorte and Dom would be forever grateful.