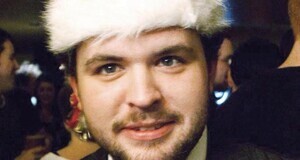 Caoilte O Broin was found dead in the River Liffey on January 2, after going missing on December 29, 2015.

Caoilte had suffered from mental health problems for several years. In addition to this, Caoilte drank heavily so he had what is called a ‘dual diagnosis‘ – something most mental health services in Ireland will not treat, according to Dual Diagnosis Ireland.

Caoilte’s sister Catriona said because of Caoilte’s drinking, his doctor insisted nothing could be done to help him.

Many of you may now be aware of Caoilte O Broin’s story. Caoilte died needlessly due to systemic failures that let families all across this country down when someone is suffering from mental health issues.

Caoilte died from his mental illness.

This could have been prevented. We are seeking legislative changes so that no other family will have to endure the suffering that Caoilte and his family have had to. On Feb 19th, we have been invited on to The Late Late Show to speak about Caoilte’s story in more detail.

On the 11th of Feb – just over one month from when we found Caoilte – we will be holding a silent candlelit vigil outside Government buildings. We will be distributing smiling face masks to represent how we tend to hide our mental health illnesses, and we will ask people to wear the masks during the vigil.

Anyone’s brother – a vigil by candlelight for Caoilte (Facebook)