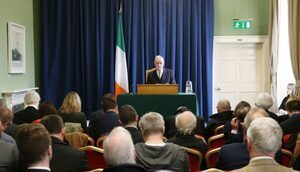 You may recall the Disclosures Tribunal.

It’s examining claims that a smear campaign was conducted against Sgt Maurice McCabe by former Garda Commissioner Martin Callinan – with the knowledge of Garda Commissioner Nóirín O’Sullivan – as alleged by the former head of the Garda Press Office, Superintendent David Taylor. Both Mr Callinan and Ms O’Sullivan deny the allegations.

You may also recall how, in an effort to gather evidence, the tribunal has written letters to almost 30 journalists but “with a few exceptions” many of these letters have gone unanswered.

“...it is disconcerting to see media organisations clustered together behind one legal team at the tribunal, as if all of their employees had covered the story in the same way, as if (for example) RTÉ television current affairs was the same as RTÉ news, or the Irish Independent the same as the Sunday Independent in practice.”

“A combined legal tactic by media resisting the tribunal may also result in all media organisations being more restrained in their investigation and analysis of matters being considered by the Charleton Tribunal than they would be if they had no stake in the outcome.”