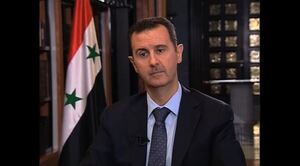 Syria’s President Assad in an interview with Charlie Rose of CBS News.

Charlie Rose: “The United States is prepared to launch a strike against your country because they believe chemical weapons are so abhorrent that anybody who uses them crosses a red line and that therefore, if they do that they have to be taught a lesson so that they will not do it again.”

Rose: “A red line of the use of chemical weapons against your own people.”

Assad: “It’s not the world because Obama drew that line and Obama can draw that line for himself and for his country, not for other countries. We have our red lines, like our sovereignty, our independence. Well if you want to talk red lines, United States used depleted uranium in Iraq, Israel used white phosphorus in Gaza and nobody said anything. What about red lines? We don’t see red lines. It’s political red lines.” 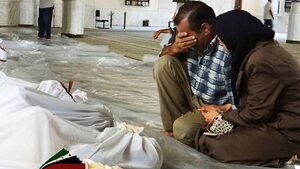 Pictures showing that the Syrian army used chemical weapons against rebel-held eld Eastern Ghouta just east of Damascus are graphic and moving. But they are likely to be viewed sceptically because the claims so much resemble those made about Saddam Hussein’s possession of weapons of mass destruction (WMDs) before the US and British invasion of Iraq in 2003…

…Like the Iraqi opposition to Saddam, who provided most of the evidence of WMDs, the Syrian opposition has every incentive to show the Syrian government deploying chemical weapons in order to trigger foreign intervention. Although the US has gone cold on armed involvement in Syria, President Obama did say a year ago that President Bashar al-Assad’s use of such weapons was “a red line”. The implication is that the US would respond militarily, though just how has never been spelt out.
But the obvious fact that for the Syrian government to use chemical weapons would be much against their own interests does not prove it did not happen. Governments and armies do stupid things. But it is difficult to imagine any compelling reason why they should do so.

The evidence of chemical attack seems compelling – but remember – there’s a propaganda war on (Patrick Cockburn, The Independent UK)