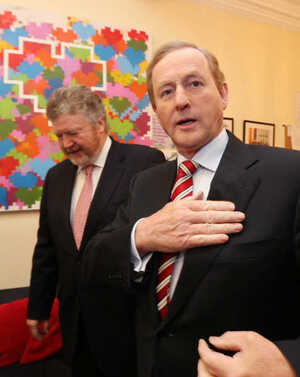 “Children First is no longer a national aspiration but a constitutional reality with the enactment of this legislation.

Within decades of our children being demonised, brutalised, criminalised for their audacity to be poor, different, abandoned, orphaned, troubled or just plain neglected, with Children First they are recognised and constitutionally protected as citizens of the Republic in their own right.

For this government, it was and remains a first but important step in imagining and creating an Ireland where the idea and experience of childhood are recognised, respected and protected.

As a country, we have a lot to be ashamed of. A lot to be sorry for. It remains in our psyche as a nation.

When we came to government in 2011, I was determined to undo some of that wrong to our children and other fragile members of our society

….But Children First is not a political amulet we hang around Ireland’s neck to protect us from the misdeeds of past generations.

Rather I believe it is truly ‘re-forming’ legislation, that recognises our children, and protects their position under the Constitution, Bunreacht na hEireann, itself.

It establishes them as individuals with their own separate rights their own discrete needs of respect, dignity and protection.”

Somewhat risible when countered against the number of children who are homeless in Dublin and around the country.