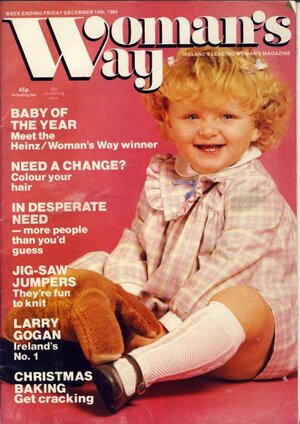 Louise McSharry (photographed as a Heinz title-winning toddler in 1984) writes on her blog:

My dad died when I was 3 (the year after the above photo was taken). He had cancer, and he’d been sick for a long time, but that didn’t make it any less heartbreaking for my mother who was 28 and alone with two kids. As a result, things did not go so well after that.
She drank more and more, until she became the kind of person who passed out in pubs resulting in the staff ringing around to get someone to collect us…

…Eventually she decided the answer was to move to America, where it would be more difficult for people to annoy her and she could drink in peace. Predictably, once in America things got worse.

…When the Department of Child and Family Services found us, my aunt and uncle were there to step in and take custody.  Eventually they adopted us, and they’re who I now call my parents.

The reason I’m writing about all of this, is because we were lucky.

…If it weren’t for them [Louise’s aunt and uncle] we would almost certainly have gone into care as many children do.  Children who in their young lives have already been let down in a deeply profound manner by those who are meant to take care of them.

More here: There But For The Grace Of God…(LouiseMcSharry.com)

Earlier: Of The 36 That Died In Care