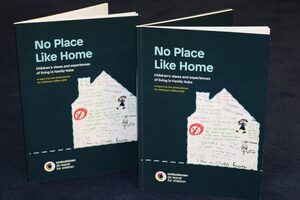 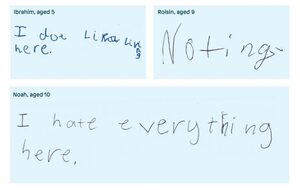 From the Ombudsman for Children’s No Place Like Home report

The office of the Ombudsman for Children launched its No Place Like Home report outlining the views and experiences of 80 children living in family hubs in Dublin, Cork and Limerick – gathered between October 2018 and January 2019.

Family hubs are “purpose-built or specifically adapted premises” to house children and families who are homeless as an alternative to B&Bs and hotels.

The children who took part were aged between five and 17 while parents of children under the age of five also took part.

In addition, as of February 2019, children accounted for over one third (almost 37 per cent) of the 10,264 people accessing State-funded emergency accommodation.

From one section of the report:

“For some children their unhappiness in the hub was so great that, despite their very young age, they tried to run away. Hannah (aged 8), cried and told us that the hub was “like a children’s jail”.

She expressed extreme worry and fear for her younger brother Niall (aged 5) who had tried to run away from the hub on several occasions.

She told us that when her mother was having a shower she would sit on a chair in front of the door so her brother could not run away. Niall had sneaked out of the hub once already and threatened to throw himself out of a bedroom window.”