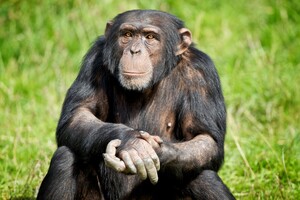 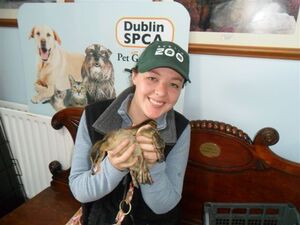 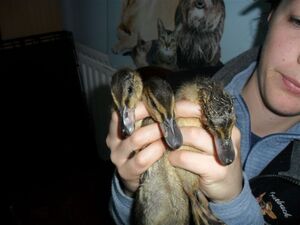 The mmf is strong in this.

From The Dublin SPCA:

Delighted Dublin SPCA staff were on hand today to receive three new arrivals from Dublin Zoo at their Mount Venus Road animal welfare shelter.
The arrivals, adorable three day old baby ducklings whom Dublin SPCA animal care staff have named Paddle, Waddle and Drake, were rescued from the clutches of possible injury or even death by a quick thinking chimp called Bossou (top).
The Mommie duck, a resident of Dublin Zoo, built her nest on the edge of Dublin Zoo’s Chimp Island. Days after her chicks had hatched gentle giant Bossou, a nine year old, 60 kilo chimpanzee, worried they were in danger from his island mates so he waded in and with a steady hand  rescued the little ones from the water. Then cradling them to his chest brought the ducklings to safety.
Dublin Zoo keeper Yvonne McCann, who contacted the Dublin SPCA seeking sanctuary for the ducklings, said “A worried member of the public alerted me saying she’d noticed a large chimp holding onto the ducklings.”
Yvonne, realizing immediately that Bossou was actually protecting the babies sprang into action. She called Bossou, enticing him to the edge of the chimp habitat and expertly traded each duckling for a banana, bringing all three to safety.
Spokesperson for the Dublin SPCA, Miriam Kerins said today, “This is an incredible, truly touching and inspiring story of humanity and compassion shown by a gentle giant. Bossou is indeed a hero. The Dublin SPCA are pleased to announce that Paddle, Waddle and Drake are none the worse for their adventure and are having the time of their lives at the shelter”.