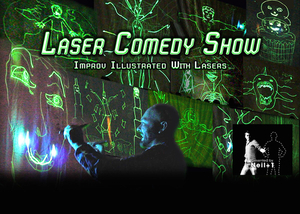 The Laser Comedy Show is a one of a kind, improvised story telling experience. Chris uses Laser Reactive Technology to draw characters and scenery with a cinematic sense on a glow in the dark screen, which the lines fade in moments like a high tech etch-a-sketch.

Chris brings the characters to life by voicing them over, creating sound effects, music and continually drawing action to turn a 2-D screen into a 3-D world.

With support from Neil+1 (Neil Curran – yes, him off the telly!)

The show moves to the Accidental Theatre, Belfast on February 17.