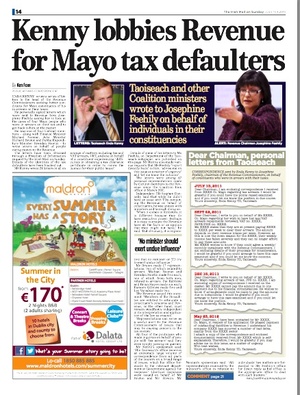 From today’s Irish Mail on Sunday:

Enda Kenny wrote a series of letters to the head of the Revenue Commissioners seeking better conditions for Mayo constituents of his in arrears on their taxes.

He personally signed letters which were sent to Revenue boss Josephine Feehily asking her to look at the cases of four Mayo people who were in arrears on their tax and to get back to him on the matter.

He was one of four Cabinet members – along with Finance Minister Michael Noonan, Jobs Minister Richard Bruton and Public Expenditure Minister Brendan Howlin – to write letters on behalf of people owing money to the Revenue.

Mr Kenny wrote 21 letters in all on a range of matters including tax and VAT arrears, VRT, and one on behalf of a constituent experiencing ‘difficulties in obtaining a tax clearance certificate in order to renew the licence for their public house‘.

A new kind of politics, they said.