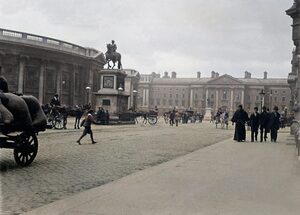 My restored and colourised late 1800s photo of College Green in Dublin City with the statue of William of Orange on his horse which was erected in 1701. King Billy was badly damaged in an explosion in 1928 and removed in 1929….