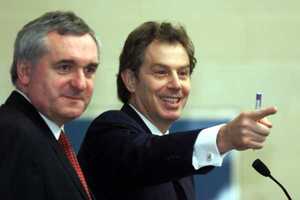 Further to concerns at the legality of ‘letters of comfort’ sent to IRA suspects on the run.

[Former British Prime Minister Tony] Blair is rightly adamant that without the letters of comfort the IRA ceasefire would never have endured. “The issue of OTRs ( On the Runs) was absolutely critical to the peace process and at certain points became fundamental to it…,” Blair told the MPs who have been investigating the scheme. “And I think it is likely that the process would have collapsed.”

Now, however, the UK police no longer believe the Blair letters afford these suspects any protection and are apparently keen to seek prosecutions, most especially for high-profile IRA actions in London in the 1980s. However, if such suspects were arrested and tried it would quite likely cause a major crisis in the peace process as the letters from Blair were clearly and understandably taken as immunity documents by wanted IRA members known as the OTR’s, or ‘On the Runs.’ This is what they would have expected as part of signing up for a lasting settlement.

The move is particularly ironic given that this week we have also seen some devastating revelations about collusion during the height of the Troubles between Loyalist killers and the British security forces. According to Leslie Thomas QC, a lawyer presiding at a double inquest in Belfast, loyalist paramilitaries were responsible for up to 80 deaths between July 1972 and June 1978 in Northern Ireland’s ‘murder triangle’ in counties Armagh and Tyrone, and the UK security forces may have colluded in many of those murders.

Most of the atrocities were carried out by the so called ‘Glenanne Gang’ of UVF gunmen with the alleged active involvement of soldiers and police officers. The gang operated out of farms in Armagh and Tyrone in the mid-1970s when the Troubles were at their worst. Now the families of the victims, supported by Leslie Thomas QC, are calling for a full inquest.

These allegations, although sensational, only confirm the now widespread belief that there was often extensive collusion between loyalist gangs and the British security forces during the conflict. Only this week, Anne Cadwallader, the author of “Lethal Allies,” a devastating 2013 book about the subject, testified in front of a Congressional Committee in Washington about the deep extent of this British collusion.

“If what we say is right, this is the biggest involvement of state agents in mass murder on what is technically British soil,” said Leslie Thomas in Belfast about the latest allegations. “Then we say that what the families of the bereaved want, quite simply is the truth to come out: they want justice.”

However, the British media and establishment has virtually ignored these allegations, and focused predictably on the On the Runs, especially since the Blair government’s Letters of Comfort involved an undoubted deal of official secrecy and subterfuge. There is also the fact that the ‘guarantees’ were issued by a Labour Government and not a Conservative one. In UK politics, especially at the moment, party partisanship can often come before what’s actually good for Northern Ireland, or even the UK.

However, the broader picture here is a selectivity of outrage and seeking of justice about certain parts of the Northern Ireland conflict, but also the dilemma of how much of the past should be left in the past, including the non-pursuit of suspects for past crimes