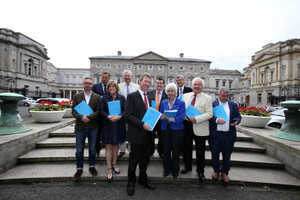 While the focus is on an ‘off-balance’ sheet mechanism to fund social housing we could be facing a situation where there are over 3,000 homeless by this time next year.

There is a lot of criticism of the political system in Ireland, and particularly the elected TDs and how the Dáil goes about its business, for being ineffective and a waste of time.

The newly formed Committee on Housing and Homelessness has shown what politicians can achieve. The committee was only set up two months ago, in April, “to review the implications of the problems of housing and homelessness, and to make recommendations in that regard”.

And this is vital and urgent work. The Dublin Regional Homeless Executive provides regular updates of the homeless figures in Dublin and the most recent ones from April show this crisis is just getting worse.

Their infographic below reveals that in April, there were 888 families with 1,786 children in homeless accommodation in Dublin. The number of children is almost double what it was just a year earlier. 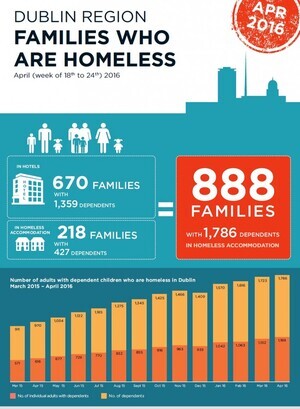 At this rate of increase in homelessness we could be facing a situation where there are over 3,000 homeless by this time next year. A shocking prospect.

The Committee on Housing and Homelessness has had presentations over the last two months from a broad range of organisations, groups and individuals involved in housing.

The policy decision makers and funders also presented including the National Treasury Management Agency (NTMA), the Department of Finance, NAMA, the Housing Finance Agency, the Minister for Housing and the Minister for Finance, and the Irish Property Owners Association, the Irish League of Credit Unions and the Construction Industry Federation.

There are groups who are very active at a grassroots level – such as Housing Action Now and the Irish Housing Network – who do not appear to have presented to the committee which is unfortunate given their ‘on-the-ground’ experience of supporting those most affected by the crisis and their innovative ideas on potential solutions.

The quality of debate at the committee meetings was very high and there was a substantial amount of really important information provided on the facts about the housing crisis, the different groups affected and potential solutions to the crisis.

All the submissions and the discussions at the committee are very interesting and you can read them all on the Oireachtas website here.

For example, during its hearing on May 31, the NTMA and the Department of Finance made a presentation on the issue of our ability to borrow (while staying within the EU fiscal rules) in order fund the provision of much-needed social housing.

The NTMA (the National Treasury Management Agency) manages our National Debt and various funds such as the Infrastructure Investment Ireland Fund (which is what used to be the National Pension Reserve Fund) and borrows on behalf of the Government.

The NTMA explained that Ireland’s debt levels (the debt to GDP ratio) have fallen from 120% to 94% but our absolute level of debt, at over €200 billion, is four times what it was in 2007.

And the annual interest that we must pay on this debt is close to €7 billion (which was just €2 billion in 2007).

But due to our economic growth rates we are achieving this and therefore, there is ‘fiscal space under the debt-reduction rule’ that could allow us borrow more while staying within the EU rules.

But the debt is only one of three rules.

The other two relate to government expenditure benchmark and the ‘balanced budget’ rule. This means that if we borrow to spend or invest directly by the government (or local authority which is considered a state agency), for example in social housing, it affects our public spending limits.

But if we borrow and invest it through a non-government body on a commercial basis it does not affect public spending limits as it is considered by EUROSTAT (the European agency that defines if we are breaking the rules or not) to be ‘off-balance-sheet’ spending.

This is why pretty much the sole focus of the Department of Housing, Finance and Government has been trying to find ‘off-balance’ sheet mechanisms that allow investment not affect the rules.

But there is a very obvious issue here that requires clarification. If you increase spending on an area, like social housing, and fund this through an equivalent increase in taxation, then surely nothing changes in terms of the budget deficit?

Now if the planned abolition of the USC was going to cost us approximately €4bn then surely that could be paused which would then leaves a number of billions that could be invested in social housing provision and not require borrowing or lead to a breaching of EU rules?

The committee will present its final report today.

It will be well worth a read to see what’s in it. 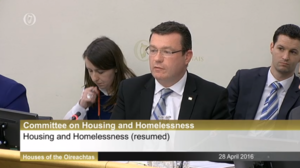 From top: Environment Minister Alan Kelly and Independents 4 Change TD Mick Wallace in a meeting of the Committee on Housing and Homelessness this morning

During a meeting of the Committee on Housing and Homelessness.

“You talk about the vacant site levy as if, I know you say that you’d have liked to have brought it in in 2017 and you’d like 7% and, well I’m glad to hear that, but the vacant site levy that was brought in before Christmas – do you not agree that it’s absolutely a joke. It’s going to bring in so little, it’s not going to speed up the development of sites. Are you going to tell me otherwise?”

“So do you not admit that the State has refused to actually address the problem with land banking because that is the fact and it is probably the biggest problem in terms of affordability around private housing in Ireland: land banking.

“I see a site sold in Clontarf last week for, I think it’s, 27 units. The builder, the developer paid over €220,000 per unit for the site. Over 220 a unit? Now? I mean, so we haven’t dealt with it and I mean it’s an absolute scandal to the State has never dealt with it.”

“…This country is full of small sites and Dublin city has loads of them.. Do you not admit minister that there’s a huge concentration on the part of the local authorities on the big bang effect of big sites. Why aren’t we, why aren’t we getting the small sites going? Why don’t we get the small builder back in?”

“The small builders, there are small builders all over the country dying to do work. And you know what, I’ll tell you something else as well, they’re not looking for a profit of €20,000 – €40,000 a unit. The builders that I know are probably different to the builders that Frank Daly [of NAMA] might know. They’re not looking for that. I tell you what – if they made between €5,000 and €10,000 profit per unit, they’d be delighted with themselves, they’d be more than happy.”

“I’m asking you minister, is it possible to actually activate a lot of the smaller sites and get the smaller builder back in but then we’re back to the finance problem again. Can the State start organising the finance for them? Because the banks won’t give it them, the banks don’t want to lend to him.

“Most of the building that’s going on in this town today is being done by investment funds and the Irish banks are not even funding it but these guys come up with their own money and they’re dominating what’s being built at the moment. You have the Kennedy Wilsons and the [inaudible] now building but they’re only building for the rental market – so they don’t have to worry about selling them at a low price.”