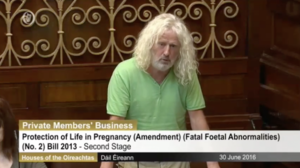 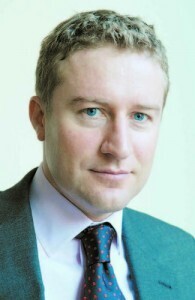 Further to last night’s debate on Independents 4 Change TD Mick Wallace’s bill to allow for terminations in Ireland in the case of fatal foetal abnormality – a bill which has been deemed unconstitutional by the Attorney General Máire Whelan.

Pat Leahy, deputy political editor of the Irish Times, spoke to Seán O’Rourke on RTÉ Radio One this morning.

During their discussion, Mr Leahy insisted that, having seen Ms Whelan’s advice, it is ‘utterly unconstitutional’.

He also suggested that if the Government doesn’t accept Ms Whelan’s advice, she may have to step down.

Readers may note that Mr Wallace has called for the advice to be published – to allow for a debate on the advice.

Leahy: “Yeah. And at present in relation to this issue, the Government is unable to do that. And that’s despite having been advised by its chief law officer and legal advisor, the Attorney General, that the bill that Mick Wallace has put before the Dail is unconstitutional. And I’ve seen that advice, I wrote about it in the Sunday Business Post last year and again recently in the Irish Times, and that advice is utterly unequivocal, it’s not, ‘on the balance of probabilities, this is probably unconstitutional’. It’s completely unequivocal that, it couldn’t be stronger that the bill is unconstitutional. And despite that clear advice, the Government is unable to come to a collective position on that.”

Leahy: “Because the Independent Alliance members want a free vote. Now it’s my understanding that the Independent Alliance members of the Cabinet are prepared to sign up, if you like, to a collective decision to oppose this bill. But they want to be allowed the right to abstain on it themselves. Now that sounds slightly constitutionally shaky to me but it may be a way out. And, ultimately, if you were to ask me, I suspect that that’s the way out that will be found. As of yesterday, I’m told, that the Taoiseach and Sarah Bardon writes about this in our paper [Irish Times] today, the Taoiseach was absolutely firm that that would be impossible. That having been advised by the Attorney General, the Government must follow his advice and ministers must act in accordance with that advice.”

Leahy: John Halligan gave a very powerful speech last night in the Dáil. Not the first powerful speech he’s given on this subject and there was motions on this in the last Dáil as well and it’s peroration was that he didn’t care what the Attorney General’s advice does, sorry, didn’t care if it was unconstitutional. Anyone who was there last night or anyone who was watching last night, couldn’t have been in any doubt other than he’s certainly, if he’s not going to vote for this, he’s certainly not going to vote against it. I think that presents him with a problem.”

O’Rourke: “Here’s a question and I’m just wondering, I’m no constitutional lawyer but is John Halligan part of the Government in the sense of being part of the Cabinet, he’s not?”

O’Rourke: “So could it not be said, look he’s not in the Cabinet, so he’s not, he doesn’t have the same constitutional responsibility, we’ll cut him a bit of slack. On the other hand, it’s very bad, is it not, for political discipline?”

O’Rourke: “That’s where his difficulty will lie…”

Leahy: “If the Government decides that to oppose this bill, and that depends on the independent ministers in Cabinet, resiling from their opposition to that collective decision being made, then he’s got…but there’s another problem here I think Sean, which is that if this is let slide and the Government does not reach a position on it, I think that’s a very serious situation for the Attorney General, whose advice to the Government is unequivocal. Now if the Government is unable to follow that advice, I think it probably puts her in a more or less untenable position.”

O’Rourke: “You think she might resign if the Government doesn’t stick by and accept the Taoiseach’s insistence, they have to vote against this…”

Previously: ‘You Allow An Unconstitutional Bill On Property Rights But Not Women’s Rights?’