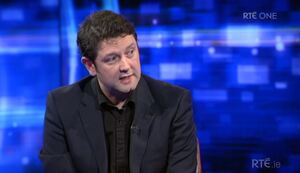 The Garda Síochána Ombudsman Commission released a statement yesterday saying its investigation into the leak of the GSOC ‘bugging’ story to John Mooney, of The Sunday Times, yielded no result.

Of the investigation, led by Mark Connaughton SC, GSOC found:

The report was unable to establish individual responsibility for any disclosure, either on the part of an employee of GSOC or any other party. It concludes that it is difficult to identify what additional information could usefully advance matters, short of obtaining the co-operation of the journalist in question, who declined the invitation.

Further to this, Mr Mooney was interviewed on RTÉ One’s Today With Seán O’Rourke show this morning.

Seán O’Rourke: “The Cooke Report looked at the bugging and it basically dismissed, I think in large measure, a lot of what was suggested by GSOC, about the bugging, whether it happened and so forth.”

Mooney: “But, you could say that, but the one thing I would say about the Cooke Report is that it made no reference to the background to all of this which was, I was just astonished with. I think it also, he, Judge Cooke has subsequently amended the report twice. He misquoted, The Sunday Times wrote a letter to state, the admission that he’d done that. He subsequently amended it a second time in relation to claims that he made about an individual who had communicated with him. But, if you look at the report, Verrimus, the company that did the security audit on GSOC maintain and stand over their findings. I’m not technically qualified in this area to say whether they’re right or wrong but if you talk to them now, they will say they were right. And, in terms of Cooke, and I kind of don’t like to become a player in these things, I would maybe defer to other impartial observers on it. They stated that he showed a remarkable lack of curiosity about some of the findings that he made. For example, he talks about white vans being outside, the Garda Ombudsman’s office, they gave him quite extensive interviews about why they believed they were under surveillance, leaving aside the technical stuff that they had uncovered…”

O’Rourke: “Yes, the core of the thing was, I think or one of the strong elements at least, that there was equipment being used that was only available to State security services. Now that seems to have been largely dismissed.”

Mooney: “What we had actually said, in our original story, is that Government-level technology, which it was. He says that you can buy IMSI catchers but I’ve spoken to a lot of people around the world about this type of technology and those sort of devices really are dependent on the network, whether it’s a 3G or 4G network and all that sort of stuff, so…”

O’Rourke: “Right, John, coming back to this finding now, it seems to have hit a dead end. Seven suspects. Apparently the leaker had to be one of those seven people. They can’t identify who it was, so surely they’re seriously undermined, their credibility is undermined because anybody thinking of having any relations with them or any dealings with them has to be asking him or herself, ‘well, look where is this going to end up, will it be on the front page of The Sunday Times?'”

Mooney: “Well, I’d hope so. My attitude on that is that, how would I put this?…journalists have a job to do. And, in my particular line of work, where we’re dealing with the heavier end of matters, we go to extraordinary lengths to protect people, there’s lots of different…”

Mooney: ‘There’s lots of different issues that I, for example, I have not chosen to publish out of national security reasons, where there would be representatives and representations made to us by Garda headquarters, whatever. But we publish a lot of information, we’ve had lots of reports, really since the beginning of the year that were confidential and Government reports on all sorts of matters that have been published and we have quoted word-for-word in the paper. My attitude to this is that, for some reason, people have zoned in on information that we have concerning the activities of the Garda Ombudsman but, I mean, we published the Roma report a couple of weeks ago, we published another GSOC report about a shooting fatality in Lucan which was quite serious, three or four weeks ago…”

O’Rourke: “Yes, but surely an agency like that, the Garda Síochána Ombudsman Commission should be able to carry out its business and give people assurances that, if they cooperate and if they give information, it will not go any further. Now they’re clearly in no position to do that. You just listed a litany of reports that you’ve published. And, fair play to you, that’s your job, right? But you put yourself in a position of somebody who’s been asked to cooperate with that. That agency’s credibility is shot surely?

Mooney: “Well I wouldn’t agree with that assumption because we publish a lot of stories on the basis of very sensitive information that we get from all sorts of agencies. That’s what journalists do. And investigative journalism, that’s what it involves. The only thing that I’m concerned about is producing information that is in the public interest and protecting…”

O’Rourke: “You can’t be accused of anything, other than doing your job. And that’s accepted but a lot of heads have rolled I suppose in the justice area, apparently as a result of this bugging controversy and other stuff that’s happened. Now Alan Shatter certainly feels aggrieved and he’s actually gone to the High Court so we better be a little bit careful about what we say about the fact that he wasn’t interviewed by Mr Cooke – sorry, sorry, I beg your pardon, by Guerin, I beg your pardon. There’s so many reports, it’s easy to get them confused. But, at the same time though, like do you feel that maybe he, Shatter, and Martin Callinan, to a certain extent, have a right to feel aggrieved at this stage?”

Mooney: “I think Martin Callinan has a right to feel aggrieved over what happened to him which is subject to an investigation by Justice Fennelly. We’ve been highlighting the issues, the constitutional issues, that are raised as a result of the manner in which he was forced to resign. In terms of Alan Shatter, Alan Shatter has some very valid points about Guerin which, I think in time, is going to be shown to be a very flawed report. I think the findings that are made against some senior gardaí are completely flawed and wrong, but in stating that, it should be stated that Alan Shatter mishandled and did the wrong thing in various matters in the Justice portfolio. This isn’t just about GSOC or anything else. This is in relation to whistleblowers and other matters. I think any position that he finds himself now in really is one of his own making. In relation to Marin Callinan, I think Martin Callinan was forced into a position that I think is going to be called into question in a major way quite shortly by Justice Fennelly, that’s an independent reading of it. But, in stating that, Martin Callinan, and people are forgetting this, Martin Callinan was in charge of the guards when there was huge obstruction placed in front of the Garda Ombudsman which is a properly constituted body within this country and he was responsible for that. So, while he may have went for something…”

O’Rourke: “They had it out publicly and privately about the levels of cooperation. Look we’ll leave it there…”

Previously: ‘They’ve Done Their Damndest To Cover Up’