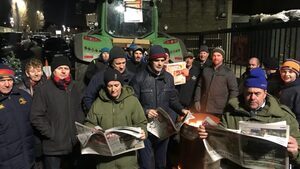 Reinforcements for the #NightShift 👊💪 pic.twitter.com/Wksi1afMXb

Outside Dunnes Stores in Cornelscourt in Dublin 18.

Members of the Irish Farming Association hold a 24-hour protest over beef prices, following four similar 12-hour protests elsewhere in Ireland over the past week.

The protest outside the Dunnes Stores will end at 12 noon today.

Previously: For The Way We Live Today