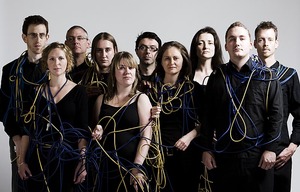 01. Crash Ensemble was formed in 1997 by composer Donnacha Dennehy, and are dedicated to bringing the contemporary to the classical sphere, in particular the commission and performance of work by new artists.

03. Streaming above is their performance, led by Katie Kim, of Kim’s Wide Hand, as part of Salt Interventions, their collaborative live reinterpretation of Kim’s Choice-nominated album Salt.

04. You can witness this collaboration for yourself live on Saturday night, as Salt Interventions takes in a Dublin date at the Grand Social, as part of the MusicTown programme of events.

Thoughts: Approaching their twentieth anniversary, Crash Ensemble remain at the forefront of music in Ireland.