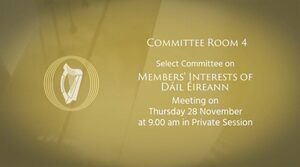 NEW: Dáil committee on members interests has broken up (after 3.5 hours of meeting) without any agreement on prospective sanctions against the TDs implicated in #VoteGate. They’ll meet again in two weeks

Committee has decided not to pursue complaint against Barry Cowen over his whereabouts during voting period of Sept 26 – footage cast doubt on whether he was in chamber for some votes, but committee says there’s no concrete evidence of wrongful action