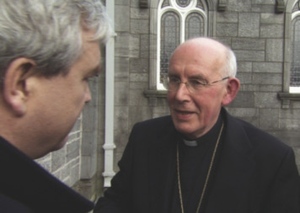 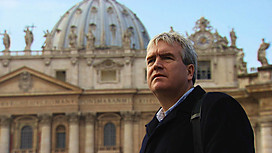 Darragh MacIntyre (above), the reporter who put together last night’s The Shame Of The Catholic Church documentary for BBC 2, interviewed on Newstalk’s Breakast by Michael Clifford.

Michael Clifford: “First of all, Sean Brady’s role in the investigation into Brendan Smyth. We knew already he was part of this commission that was set up to look into the initial allegations that were made that Brendan Smyth was abusing children. He has always claimed that his role in that inquiry was merely that of a note-taker. Your documentary last night seems to dispute that in the first instance.”

MacIntyre: “Well yes. When limited details of the secret inquiry came out first, Cardinal Brady and his spokesman said that he had a minor role, that of a notary or indeed a note-taker. In fact  Cardinal Brady I think said he was a notary without powers. And he believes, plainly, that he simply did his job. But during the investigation, we came across a hand-written document suggesting that his role was more significant. He wrote, and I quote “I was dispatched to investigate the complaint”. Now we have asked him, we did ask for an interview but he turned down the request. And just to take you back to the top of this, the new evidence here Michael, and this is a significant element. The new evidence that we revealed is that the Cardinal was given names, and other priests – the other two priests involved in the investigation. But the Cardinal was essentially drawing all the information together and it was he, it was the Cardinal who compiled the report and who eventually gave it to his bishop. But the new evidence reveals that the Cardinal was given names and addresses of children who were being abused or who were at risk of being abused by the man you’d described as Ireland’s most, well I’d describe him anyway, as Ireland’s most notorious paedophile Brendan Smyth. But he failed to ensure they were protected. That’s the point. Brendan Boland is the boy we spoke to in last night’s programme. Brendan was 14 years of age when he disclosed that he was being abused by Fr Brendan Smyth and he disclosed this to a priest, a young priest in Dundalk, who took him immediately home, straight home to his parents. And then subsequently this particular young priest reported it to the Church. Then the Church, pretty soon afterwards, set up a secret canon law inquiry. Now three priests took part in this process. Among them Cardinal Brady, then of course Fr John Brady at that stage, a canon lawyer, a bishop’s secretary, that’s key, and a school teacher. Cardinal Brady took down the answers, another priest asked the questions. Another key point here, 14-year-old Brendan was interviewed alone, without his parents. He was asked a variety of questions. Some of them focused on what Smyth did, others focused on his own behaviour. And we have the documentation from the Church, the Church’s own documentation to verify Brendan’s account. And this is the most significant thing of all. He spoke of five children who were on trips with him that Brendan Smyth took them on, across Ireland, marathon excursions up and down the island. And Brendan recalled, to that meeting, he recalled the names of five children, their names and addresses. We then tracked down, I tracked down those five children. And all say, that to the best of their knowledge, their parents, their families were not warned in any way at all about paedophile Brendan Smyth. So the consequences of this, sorry to go on a bit, Michael…”

MacIntyre: “The consequences of this are the issue because the consequences meant that for two of the children, the abuse continued with them. But in one boy’s case the abuse not only continued with him, it crossed to his sister – she was abused for another seven years – and then to four first cousins in the extended family abused right up until 1988.”

Clifford: “Now is it correct that one of those boys that Brendan named in that inquiry, a boy from Cavan, that Sean Brady himself interviewed that boy some days later.”

Clifford: “And he had not informed the boy’s parents about?”

MacIntyre: “I spoke to that boy. That boy told me, who’s now a middle-aged man, he told me, on his doorstep, he told me he had never spoken to anyone about this before, let alone his parents. He was asked to attend a meeting in a parochial house, he went to the parochial house. He was interviewed by Cardinal Brady, there was another priest present. His parents were never notified. He was 15 years of age, he was..And he was in the middle of a secret canon law inquiry and his parents were never told.”

Clifford: “Did he attend on his own, Darragh? Did his parents have no knowledge?”

Clifford: “In a similar way that Brendan had been sworn to secrecy earlier.”

MacIntyre: “Exactly the same way. Now remember the Church will point this out and it’s fair to point out that the children were not sworn to secrecy about the abuse. They were sworn to secrecy about the process they were involved in. They were only allowed to speak to authorised priests about it. But I’d suggest the effect of that on a 14 or 15-year-old boy was pretty much the same.”

Clifford: “And, one other thing strikes me, we’re often told different rules and different morales applied at that time. Yet it also emerged in your programme last night that initially Brendan Boland, when he was a boy, he initially went to a priest. And that priest did go to Brendan’s parents.”

MacIntyre: “The point we make in the programme, that’s absolutely the case. What the priest did in the very first instance, a young priest in Dundalk, he went straight to the boy’s parents. No dilly-dally. Now we don’t make a big deal about going to the police in the programme, about going to the guards. We don’t say ‘you should have gone to the guards’. We point out plainly that the guards were not notified. We know that. That has been known for, almost forever now it seems.  But the big point is this – What would a parent do? What would somebody do if you knew that so-and-so up the road was being abused? What would you do? Would you let the situation..Would you take any risks in that situation? Would you intervene, that’s the point.”

Clifford: “Yes. And you put these, a lot of these details to Cardinal Brady’s office and did you get any response?”

MacIntyre:  “We got, we certainly have been in correspondence with him and we have got, we have…I suppose the best way to put it is we reflected their response in the programme last night. I mean one of the things they would say is, they would say, for example, that there is no State or Church guidelines responding to allegations of child abuse in Ireland at the time. And they do point out that the oath wasn’t simply about swearing the child to secrecy about the abuse it was about, they would argue that it was about in fact giving greater force and integrity to the evidence given by Mr Boland.”

Clifford: “OK. Now just to touch on this last element Darragh, because I think this is quite important. The second boy you referred to, the boy from Cavan. He was interviewed, without his parents’ knowledge and what he revealed in that inquiry to Sean Brady was never told to his parents to the best of that boy’s knowledge.