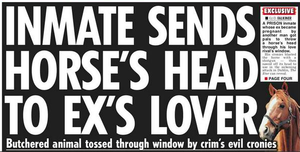 A prison inmate whose ex became pregnant by another man got pals to throw a horse’s head through his love rival’s window. His cronies blasted the horse with a shotgun – then sawed off its head to use in the sickening attack in Dublin, The Star [not available online] can reveal.